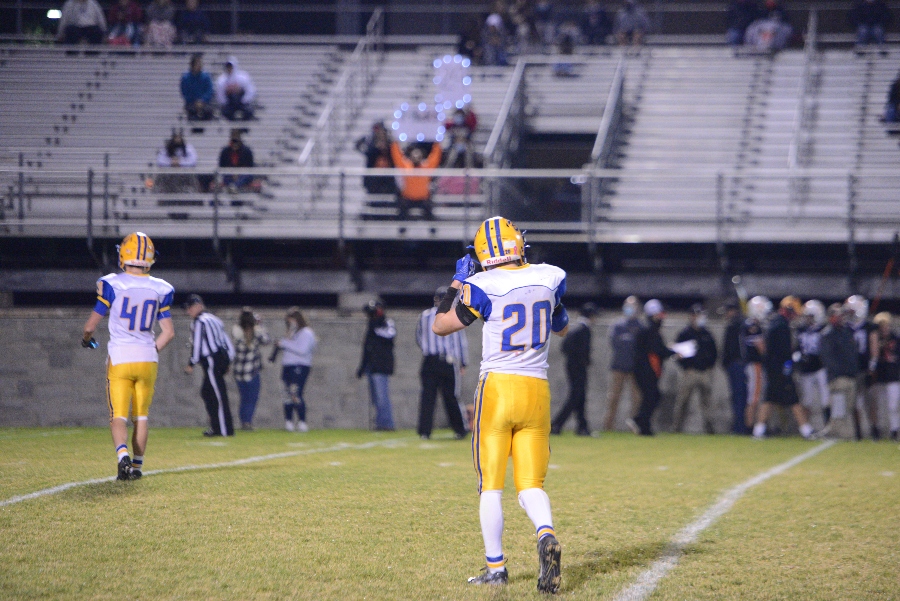 Zach Mallon ran for 200 yards in the second half alone during B-A's Backyard Brawl win over Tyrone.

Normally the backyard brawl would be the first game of the year between Bellwood and Tyrone, but with a shortened season in 2020 teams played only within their conference.

Many thought that the rivalry would have to wait for next year, but after both teams lost their playoff games the administrations decided to let the boys play in an exhibition game to decide who gets to keep the Backyard Brawl trophy.

For the first time since the traveling trophy became a part of the series in 2006, it’s staying in Bellwood for a second consecutive season.

The game started off slow with both teams containing each other to no points through the first quarter. The first score of the game came from junior Domonic Caracciolo, who took a fumble back 68 yards to put the Blue devils up 7-0. The Blue Devils took the lead and never looked back, securing a 29-16 victory over the Golden eagles.

The run game proved crucial for the Blue Devils offense yet again with senior Zach Mallon leading the charge with a season high 244 rushing yards and 2 touchdowns. Combined with last week’s stellar performance that puts Mallon at 1,145 rushing yards on the season, with 18 rushing TD’s. Keep in mind that Mallon had that many yards in just 8 games with 128 carries. The normal regular season for the Blue Devils is around 10 games plus a couple rounds of playoff games, so there’s no telling how high up the B-A rushing charts he could have climbed were it not for COVID-19.

After Caracciolo gave B-A a 7-0 halftime lead, Mallon scored three times in the second half, going for more than 200 yards in the final two quarters. Nick Plank also added a second-half score.

B-A led 22-0 before the Golden Eagles ever scored.

“Last week wasn’t a good game for us, and we wanted to come back in our last game and finished strong,” Mallon said. “Especially against our rival, Tyrone, it means a lot.”

“This win feels great,” said head coach Nick Lovrich. “Anytime you have the backyard brawl, and you bring home the win it’s just an amazing feeling. I’m really proud of the way our guys played tonight, especially bouncing back after the tough loss last week, our guys did an all around awesome job.”