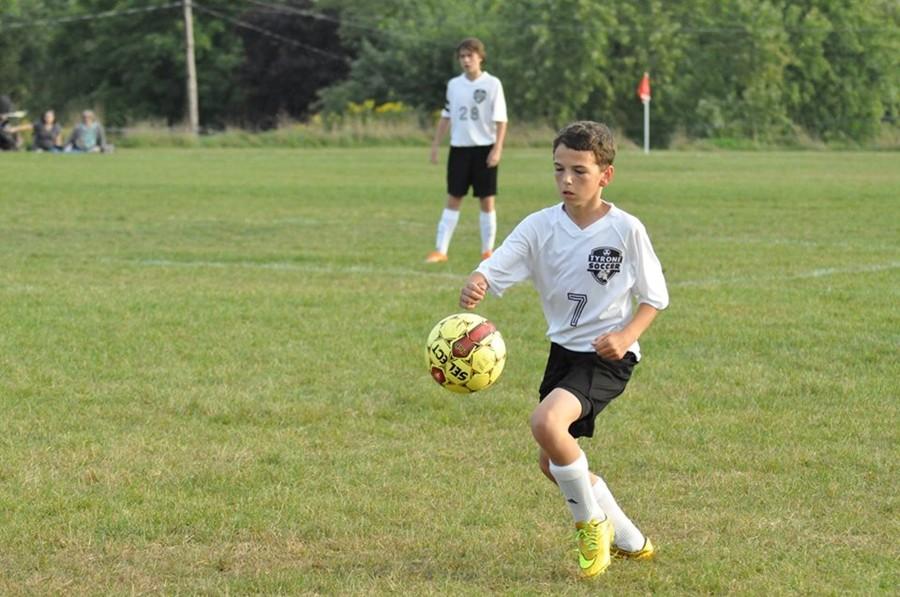 Thanks to the new soccer program, rising stars like Owen Shaulis can now improve their skills while playing against for their school.

For the first time ever, Bellwood-Antis has a junior high soccer team for boys and girls this year. Like the varsity team, the junior high team is also a co-op sport composed of our own B-A students and students from Tyrone Area Middle and High School.

A lot of planning went into organizing and funding the teams. This wasn’t an overnight decision.

The discussion about having a junior high team started in February of this year.

“These were just informal discussions, at first, to see if there was even the possibility of having junior high soccer teams,” said Tim Johnston, a lead supporter in creating the teams.

Meetings were held with interested parents and the school board. An athletic committee meeting was also held to finally get the teams approved, and the Bellwood-Antis School Board Athletic Committee made the recommendation to the board that they approve junior high soccer as an unfunded sport last spring.

Now it was the kids’ turn to do their part.

Because this was only approved as an unfunded sports team, each player would have to raise money for his or her own team. For one junior high soccer team, the estimated cost would come to approximately $6,000, which is almost $300 per player. The teams raised this money through fundraisers including the selling Marianna’s hoagies, Tyrone soccer attire, and mums.

Johnston is someone who feels very strongly about the team, and it’s safe to say he’s a major reason the teams got approved.

“I think the Bellwood players have done extremely well both practicing and playing. I think they also realize how fortunate they are to be playing soccer and how much went into getting the teams approved,” he said.

Twenty-eight-year old Josh Eger is the coach for the boys’ team, and he feels having a junior high program will have a major impact on the entire program.

“Not only will they be more technically skilled, but also mentally. By the time these kids are all on varsity together, they will be used to playing with each other, and knowing each other’s strengths and weaknesses, making them able to play more as a team,” Eger said.

Be sure to come out to the girls’ or boys’ games, which are played at the Harry K. Sickler Athletic Field in Tyrone. Show support for our future varsity soccer team!