GAME ON: Axis and Allies 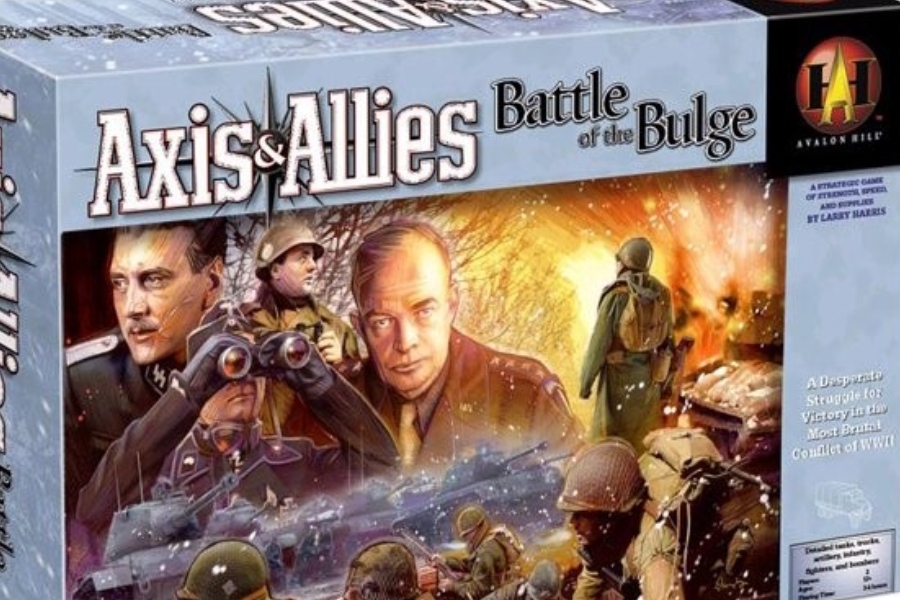 The board game Axis and Allies is an oldie but a goodie.

The system of movement is very similar to other games, with two notable exceptions. These are the inclusion of trucks and blitz maneuvers for tanks. The former can move infinitely on roads while not in an enemy zone of control. They can carry up to six units and infinite supplies, this becomes very important. Tanks can move one off road or infinitely on roads while not in an enemy zone of control. This being said the blitz rule allows tanks of a single hex to be activated using a supply token. These tanks may then move one extra, even through enemy zones of control. This can be done as long as you have supplies and as many times as you want a turn. This move can be very useful in the right circumstances. These movement rules do not exist in the other Axis and Allies that I have played.

The combat system is completely different than anything I have encountered before. All defensive units are laid out and in a specific order. All roles six or lower, on the 12 sided die, are hits. If there are more than six defensive units reroll the hits. The order of the units determines the number assigned to each unit. When the number assigned to a unit is rolled it that unit retreats. If a two of that number is rolled the unit is destroyed. Any extra dice that land on that number are effectively misses. This feature makes the game unequivocally distinctive. This odd system works surprisingly well and gives the game a lot of playability.

Yet another unique system in the Axis and Allies franchise is the supplies system. Supplies must be used for everything, from movement to combat. If you do not have supplies you can not do anything. This becomes a massive problem for the Axis player who will find that, unless he manages to capture resources, he will quickly be restrained in the moves he can make. The Axis player does not get enough resources to keep up a sustained attack along the line, so must be picky as to where to move men and where to attack. Supplies can also become a bigger problem when the air force comes into play. These rules make the game much more historically accurate. It also gives the Allied player a much better chance of winning. In fact it might go a little too far in inhibiting the Axis player as it makes it difficult to win as the Axis, but, to be fair, they did lose in real life.

The final unique feature involves the nature of air combat rules. To start with, the rules include historical weather conditions. This is represented by the fact that no airplane may be used in the first four turns. They also fight in odd manners. First, the planes fight each other in similar fashion to ground combat. Second, anti aircraft guns attack the planes. The way the number of dice used is determined is completely unique. Rather than, like in other games, there being dedicated AA gun units or artillery being used as AA guns, the number of dice rolled is determined by the number of types of units in a sector. This means that for every unit type, not for every unit, one dice is rolled. Only after these things are complete can aircraft attack ground units. Alas even if aircraft are destroyed they all return next turn. This last thing is something that I, personally, am not a fan of. It creates a very hard time for the Axis player and really does not make sense. If a unit is destroyed it should remain destroyed.

Overall Axis and Allies Battle of the Bulge is a great game. It stimulates the mind and includes many different factors to ponder whilst making a decision. It can be very hard to win as the Axis player, but it is still worth a play from both perspectives. If you find it for sale it is definitely worth the money and time to play it.