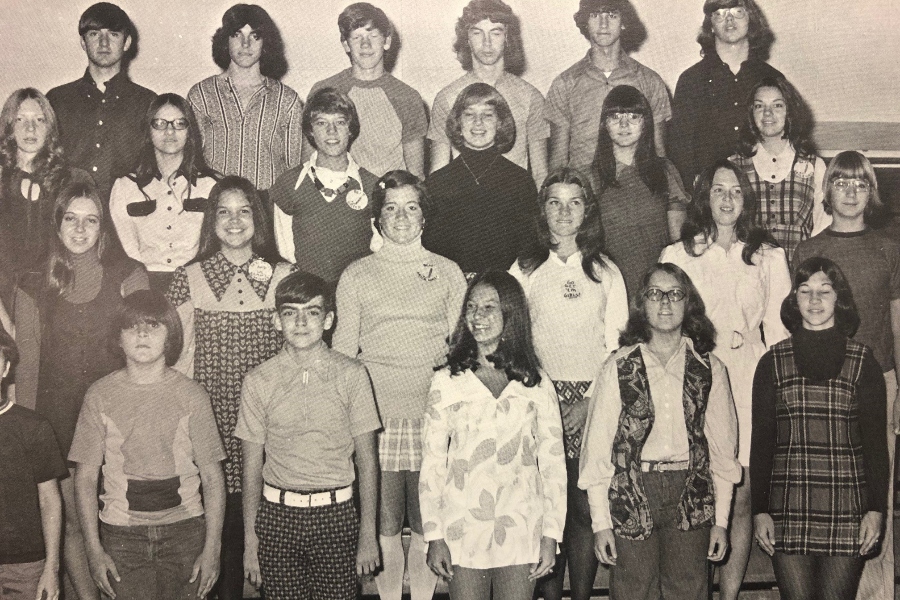 This photo from the 1974 Tuckahoe Yearbook exemplifies the more formal dress code at BA in the early 1970s.

Students now at Bellwood-Antis complain about not being able to wear ripped jeans into school and if they do they must cover up the holes, but back in 1971 the Student Council proposed a new dress code that is more strict than the one we have now.

The Student Council back in August of 1971 offered these remarks and explanations to the school board. The students and faculty of the Bellwood-Antis High School were aware of the purposes and principles involved in education and had no desire to infringe upon individual rights, it said. The student council was aware that respect for self is greatly influenced by the dress and appearance of the individual students.

The boys dress code in 1971 addressed everything from clothing to haircuts and facial hair. Hair had to be neatly styled and clean at all times and it couldn’t extend below the eyebrows or fall across the face. It could be no longer than the bottom of the back of the neck. Shirts were to be worn at all times and any shirt was allowed except straight cut sport shirts. Shirts had to be tucked in.

Boys weren’t allowed to wear shorts, or trousers and jeans with rivets. Belts had to be worn if the pants had the belt loops, and sideburns could not have been longer than the side of the mouth and could not come closer than one inch from the corner of the mouth.

The girls dress code in 1971 indicated that hemlines on dresses and skirts had to be 8-10 inches above the knee when in kneeling position. Pants suits were permitted. Jackets to pant suits, tunic tops, or coordinate tops had to be loose and above hip length.

Like the boys, jeans or denims could not be worn; low neck and see through blouses were not permitted, nor were shorts or hot pants, although culottes were allowed to be worn.

In 2021, many students are angered by rules about shorts length and holes in jeans, but the truth is there was a time when most of what passes for acceptable dress today would never have made it through the front doors, most notably jeans, sweatpants and stretch pants that are commonly seen in the hallways of B-A every day.