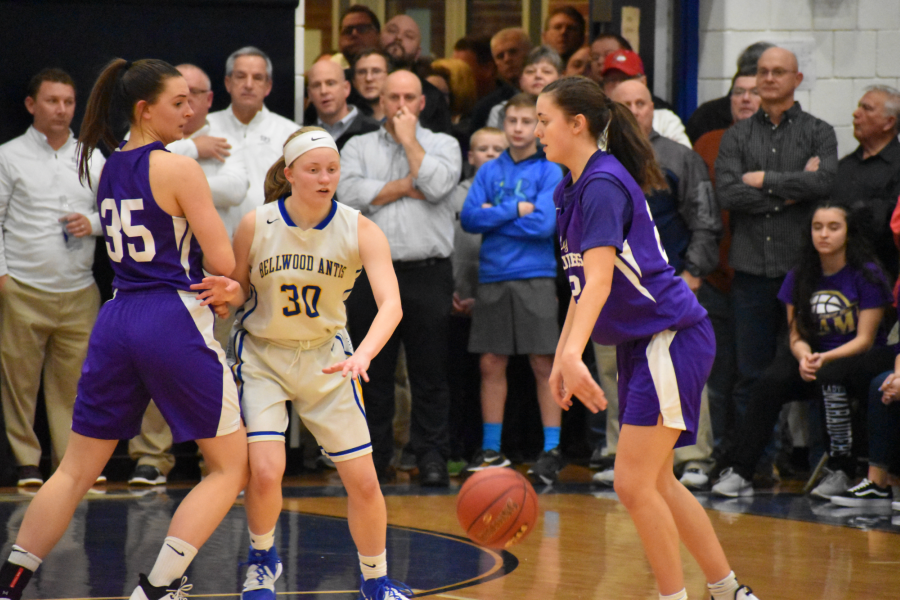 Chelsea McCaulsky, shown fighting through a screen against BG in last year's District playoffs, is expected to be a major part of the Lady Devils' offense this season.

Sophomore Chelsea McCaulsky is a guard for the Lady Blue Devil basketball team. She got some playing time last year as a freshman on a very talented team and showed sparks of scoring with the opportunities she had. Everyone knew she’d play a big role this season.

The BluePrint has named Chelsea this week’s Athlete of the Week.

The Lady Blue Devils are coming off of a 26-2 season that was cut short due to COVID-19. The girls were on pace to play for their third straight state title. The Lady Blue Devils lost a lot of starters and no one was really sure how the team would look this season.

After one game they’ve seemed to pick up right where they left off last year. The Lady Blue Devils demolished Mount Union by a score of 64-35. Chelsea led the team with 30 points. She was deadly from behind the three point arc, hitting 7 three pointers.

This was the first game for the Lady Blue Devils after a delayed start of the season.

“It feels great to start games back up again. I would rather play with a mask on my face then not play at all,” said McCaulsky. “Having fans watch you in person is part of the experience that we’re missing out on, but we at least get to play games.”

Chelsea started this season hot. A lot of her success can be credited to the work she’s done this offseason.

It’s quite evident that Chelsea will play a big role for the Lady Blue Devils this year. This year’s team is full of some new faces and it will be crucial for the team to mesh as the season progresses.

“We are such a young team, so I think it’s really important for us to grow and gain trust in each other,” said McCaulsky. “Our team goals for the season are to win the ICC North Conference, win the ICC Championship, move on to districts to compete for the District 6 Championship, and move on to the state playoffs.”

The girls are scheduled to play Mount Union at home on Wednesday. Good luck to the Lady Blue Devils this season.