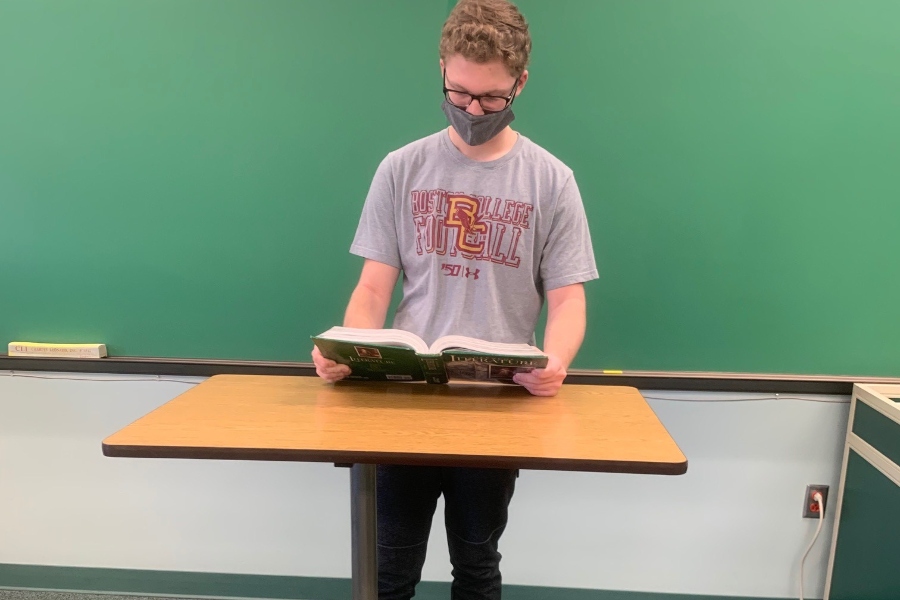 New standing desks could be the ticket for B-A students becoming healthier.

Last night the Bellwood-Antis school board officially voted on a motion to replace students’ and teachers’ desks and chairs with standing desks. The board stated that: “research shows that standing desks have vast health benefits, including increased focus, core strength, and attention span.” Although the motion received a lot of negative feedback from public comment, the vote was anonymous. However, one public comment, from Joe Schmoe, was in favor of the motion. He stated:

“I love it. This’ll toughen up those Bellwood kids. We need them big and beefy for FOOTBALL!”

When the board was inquired about how to raise funds for the new standing desks, their response was:

“We aren’t going to be able to get out of the debt we’re in now, so what’s a little more?”

Students and staff are enraged at the ruling. “This is a buncha baloney!” says senior Zach Mallon. “I wanna sit!” Rumors are floating around Bellwood that students are having a boycott against the standing desks, and will remain in remote learning unless the standing desks are gone. The board’s response to the boycott was:

”I don’t really understand this boycott. I mean, you’re only standing for seven hours, and you’re learning fun stuff like sentence fragments and trigonomic functions. If anything, this will enrich your schooling experience.”

To carry out the ruling, the Bellwood-Antis administration will have to shut down the school district to remove the old desks, await for the arrival of the new standing desks, and place the new desks in each classroom. And with Covid-19 guidelines in place, this may be quite a lengthy process. Mayor of Bellwood, John Winesickle, added his thoughts about the change.

“This is a great initiative from Bellwood. This community is becoming smarter and stronger every day. I sure hope that many school districts follow Bellwood and help get our kids healthy, especially during the times.”

Dr. Erick December, PhD, is in favor of the standing desks. His input was greatly considered when making the decision, due to his doctorate in exercise science. He stated:

“Standing desks are the future of the classroom. Although costly, they are 100% worth $3,433.78 per desk. Students today are already miserable. So tiring them out by forcing them to stand all day will definitely make kids want to come to school.”

The ruling is to take effect immediately, and students will be remotely learning during this time.