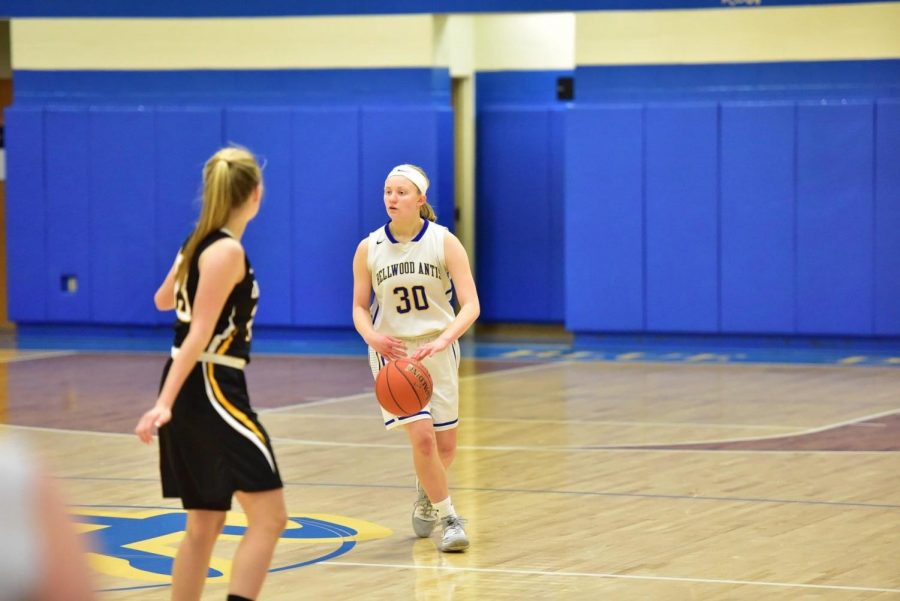 Chelsea McCaulsky works the ball down the floor.

The Bellwood-Antis girls basketball team hosted the Lady Portage Mustangs last night in a tough loss for the Blue Devils. B-A played a hard-fought game but just could not come out on top, falling 53-39.

Lydia Worthing led the Blue Devils with 16 points while Lyndsey Sossong led the Mustangs with 15.  The Lady Blue Devils  fall to 3-3 and are looking to get a big win tonight against the West Branch Warriors.

The difference in the game last night was rebounding and transition points. The Lady Mustangs pushed the ball at every opportunity they got and Bellwood tried to close the gap a few times but just couldn’t quite get past the Mustangs defensive pressure. The Lady Mustangs opened both the game and the second half with a full court press that the Devils were able to beat pretty well, but they just couldn’t get anything going in the half court.

The Lady Mustangs forced some key turnovers that led to fast break layups to really stretch their lead.

Portage led 26-19 at halftime and extended its lead to double digits in the third quarter. After a one-and-one by Worthing and a three-pointer from Jaidyn McCracken the lead was cut to 14. The Mustangs would hit a three to end the quarter making it a 17 point game and the Mustangs never looked back.

“That’s the best team we are going to play for the rest of the year and I think that we really played with them,” Coach Swaney said.  “I think that we broke their pressure very well. They also did a great job shutting down Chelsea and limiting her opportunities.”

Hopefully, The Lady Blue Devils can get back on track tonight and forget about that loss moving forwards. Best of luck to the girls and go Blue Devils!!