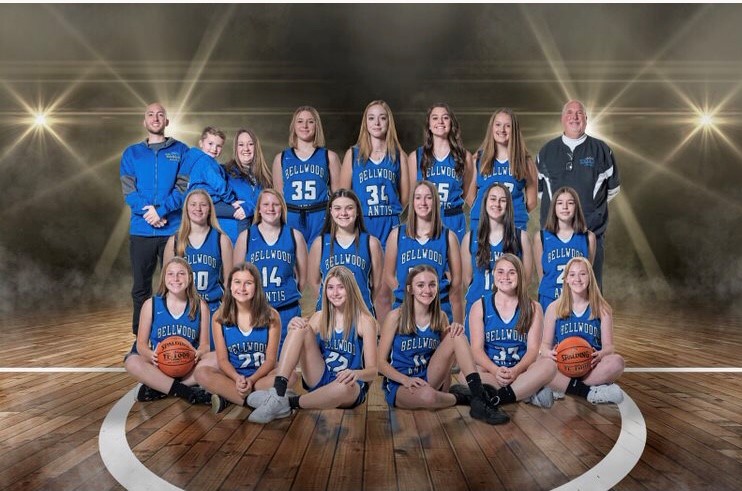 The Lady Blue Devils have had some major success in recent years. They’ve won back to back state championships and were on their way to a third before the pandemic hit last March.

However, every starter from last year’s team graduated, leaving the Lady Devils with a young and inexperienced squad.

Going into this season, no one really expected Bellwood to be a major threat in the ICC, but yet again the Lady Devils have found themselves at the top of the pack. The girls are 9-3 overall and 8-0 in the ICC.

On Wednesday, the Lady Devils took the ICC North crown with one game left in the regular season by defeating Williamsburg 55-40.

“This feels good,” said sophomore Chelsea McCaulsky. “We worked harder in the gym this year than people think, and the outcome feels great. This is a big accomplishment for a very young team.”

The team is young, indeed, with only two seniors – Dakota Woomer and Kaitlyn Robinson. The Lady Devils have small junior class, as well, made up of Jaidyn McCracken and Jaylee Shuke. The rest of the team is composed of sophomores and freshmen, many of whom start and/or play significant minutes every night.

The Lady Pirates were on a six-game winning streak with their last loss being to Bellwood.  McCracken and McCaulsky both finished with double doubles for B-A. McCracken had 18 points and 10 rebounds while McCaulsky had 17 points and 11 boards.

The game was tight after the first quarter, with the Lady Devils holding a slim 18-14 lead, but B-A took command over the second and third quarters, limiting the Lady Pirates to single digits in each frame and 11 points total to go up 43-49 heading into the fourth.

While the Lady Devils are young, they’ve stepped up and won a lot of close games this year. Everyone seems to know their role.

B-A has one game to go in the regular season. The girls will take on Glendale at home on Friday night. The Lady Devils are currently the 7th seed for District 6 3A playoffs and a win could possibly bump them up a spot.

Friday’s game will be available on Bellwood’s YouTube channel.

Good luck to the girls!