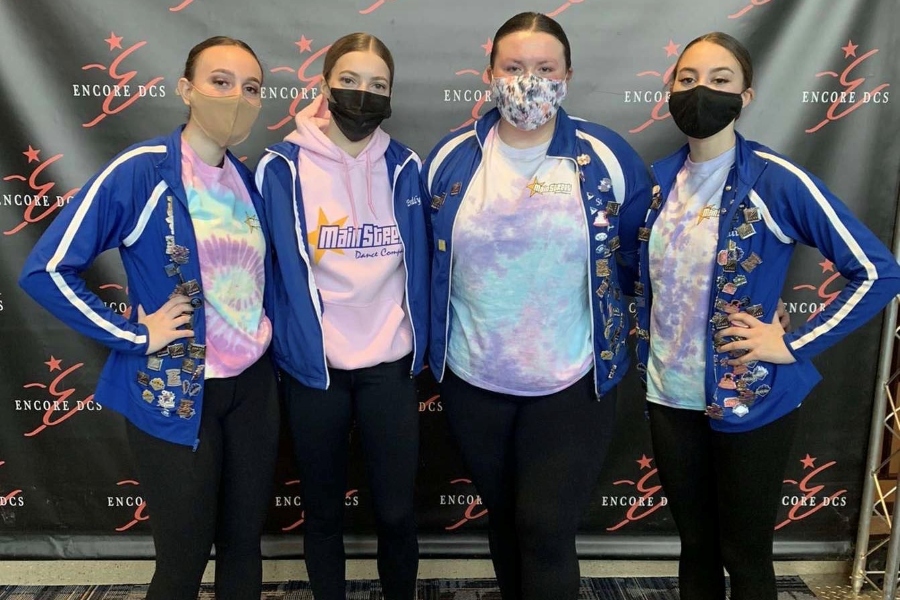 Dancers Lauren Heisler, Emily Martin, Sasha Neyman, and Kali Lonsinger take some time for a photo during a break at their most recent competition.

This past weekend the Main Street Dance Company from Andrea’s School of Dance competed in the GROOVE dance competition. Being located right on Main Street, the dance company has many Bellwood-Antis members.

The company competed in the elite category, the most difficult category in the competition. The dances are scored based on technique, execution, showmanship, costume, and choreography. The highest you can score is GROOVE perfection, followed by Elite Diamond, Diamond, Elite Sapphire, and then Sapphire.

Each Bellwood competitor placed well. Freshman Shawna Lovrich, Junior Anna Lovrich, and Senior Kali Lonsinger even placed in the highest category, “GROOVE perfection”. The three performed in a group dance that received the honorable placing. Anna Lovrich also performed a solo that received the same title. GROOVE Perfection is extremely honorable being that you can only miss 7 points amongst the 3 judges.

“I’m grateful to be a part of the team again and to have done so well altogether.” said Anna.

Seniors Kali Lonsinger and Emily Martin decided to perform a duo piece instead of two separate solos. “Our dance is called “The Last Goodbye”, which I think is really fitting because it is our last time dancing together.” said Kali. The two both agree the dance is bittersweet, being this will be the last time they dance together before leaving for college. Their piece has been scoring well, and was ranked Elite Diamond at the GROOVE competition.

Seniors Kaitlyn Dickinson and Sasha Neyman also performed a duo piece. It was a modern/lyrical dance, and it was ranked Elite Sapphire.

Due to new COVID-19 restrictions, dance companies competed within sections, rather than all together. Scores are currently being examined to find overall winners. These overall results will be announced tomorrow.