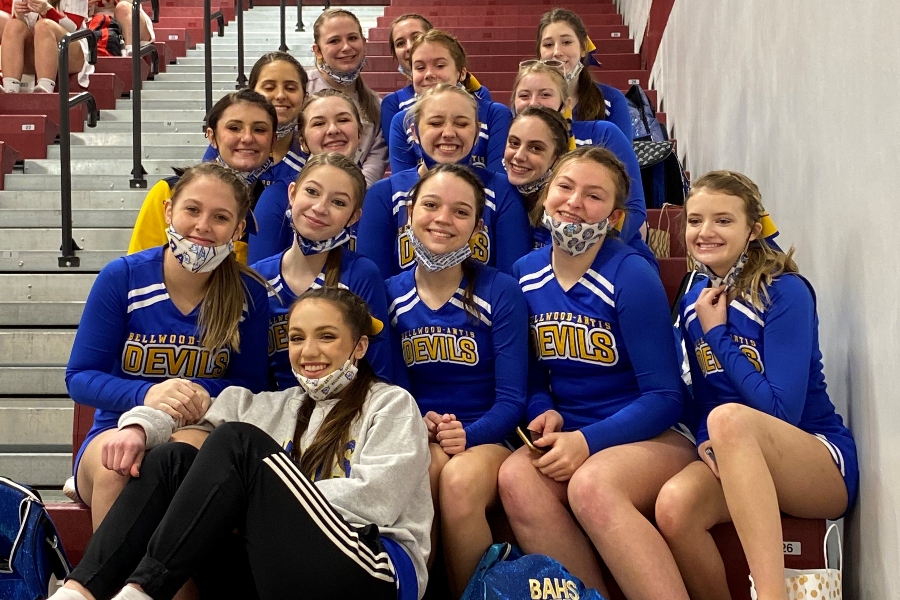 The Bellwood-Antis cheer squad wrapped up its season Saturday at the District championships.

The Bellwood-Antis cheerleading team traveled to the Altoona Fieldhouse to compete in the District 6 competitive cheerleading competition on Saturday. Nine teams competed in the competition, with the Lady Blue Devils placing seventh.

Caroline Nagle, a senior on the cheer team, commented saying, “The environment is like nothing I have ever been a part of before. Everyone is there cheering for everyone and no one puts down the other teams. Even Bishop  McCort, who wins every year, still wishes everyone good luck and cheers the loudest for other teams.”

Senior cheer member Caitlyn McCartney had nothing but positives to say about cheerleading even saying “this team is a family” and “competitive cheer really gave cheerleading respect as a sport.”

Caitlyn and Caroline have been doing this for many years and this year they were joined by Maddie Gority and Abby Mussleman, fellow seniors that had cheered before but haven’t in the past years.

“It meant a lot to be reunited with fellow seniors that had cheered before and stopped, but ultimately ended up coming back to cheer for our last year,” Caroline said.

Other team members include:

The cheer team will look to make big strides for next season including starting a junior high competition team. There will be a lot of cheerleaders coming back for the next few years, so the expectations and hopes will be extremely high.