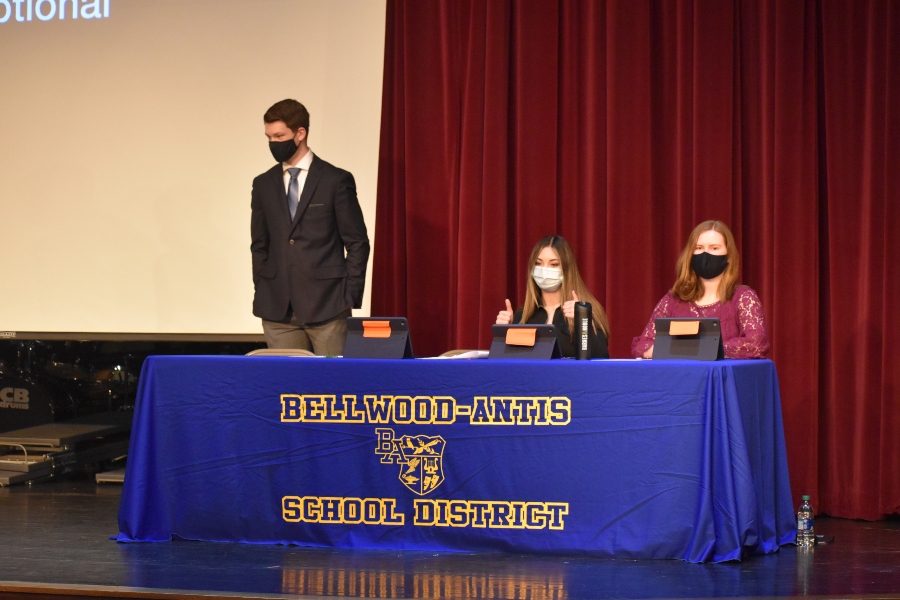 Zach Mallon, Malia Danish, and Rebecca Burns prepare for to get started at the annual CHS schoolwide debates.

The seniors in CHS debated topics on the theme “Today’s youth are the best prepared to move America forward.”

It was the ninth time CHS has held debates in front of the entire school; however, this year most students had to tune in online due to COVID-19.

The senior class was allowed to attend while maintaining safe social distancing. Students were kept one seat apart while skipping rows between them.

“The fact that we were in front of different people than we’ve been in front of all year made us step up and bring our A game,” said Haley Campbell.

Four topics were debated during the program, all of which were developed around the theme by CHS students.

The voting age should be lowered.
Generation Z’s affinity for social media will be its downfall.
New age values will create a negative effect on America’s Future.
School beyond grade 8 should be optional.

“This year’s seniors worked very hard to prepare for this event. Just to host a schoolwide debate seemed like a pipe dream in September because of COVID restrictions,” said CHS teacher Mr. Kerry Naylor. “To have the debates in front of a live crowd added an extra electricity for all the kids and really brought out the best in everyone.”

You can view the debates in their entirety below.

The students themselves were relieved to have them finished but proud of what they accomplished.

“Everyone did the best they did all year. The rebuttals were very good,” said CHS student Caroline Nagle. “Everyone was really prepared. It made the arguments people made better.”

In a typical year, the top debate from B-A would be sent to argument teachers at the University of Pittsburgh to be evaluated. Then, the teachers would choose one top debater from all of the schools offering CHS argument and rhetoric and hosting schoolwide debates. Those arguers would then go to Pittsburgh in May for a statewide debate.

However, restrictions on gatherings in response to COVID canceled the statewide debate this year for the second straight year.