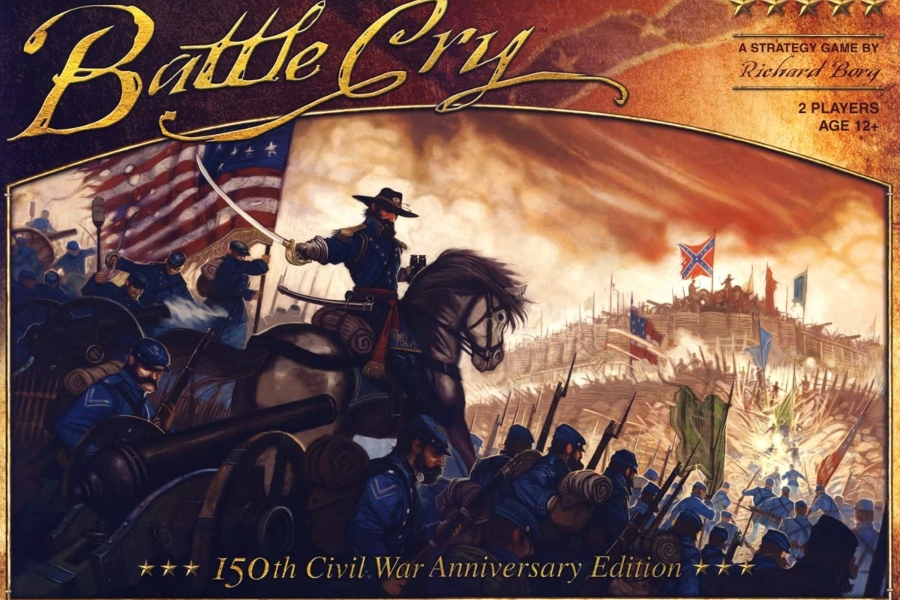 Battle Cry is fun for everyone (public domain image)

Battle Cry is a very fun Civil War strategy game. It has many unique features only present in other games also designed by Richard Borg. These features make the game challenging and unpredictable and ever so much fun. They bring the game to greatness.

Battle Cry has fairly simple game mechanics. There are three sections of the board. Each player gets cards, the number depending on the scenario, telling them how many moves they get and in what section those moves can be taken. There are three different types of units, cavalry, canons, and infantry. Each gets its own set of movement allotments and fighting capabilities. There are different types of terrain that affect the movement and battle of units. The players roll die, the number depending on range and terrain, to determine damage done in an attack. Turns are taken in sequence depending on what scenario you are playing. The winner is he who meets the victory conditions first.

This game involves a lot of complex strategies. This is in part due to the luck factor. No one knows what cards they will get or how they will roll in combat. You must be prepared for everything. Plans almost never work out after the first move and and to play the game properly one must be infinitely adaptable. One must be prepared to lose units in an instant, not do much or any damage, and not be able to order units that have advanced or are defending. The adaptability required to play Battle Cry is immense. It is what makes the game so much fun to play and so exciting to win.

The luck that makes Battle Cry such a great game can also be very annoying. The luck factor often means your plans do not work out and you need to adapt. With this said however, it is extremely annoying when you set up an attack or defense in a section and then do not get any cards for that section causing your men to stand there and die without fighting back. Sometimes a player will set up beautifull advance or flanking maneuver and then lose all those soldiers because he gets no cards to order them with. While this is annoying it also makes the game very interesting. Honestly, it is what makes the game good.