B-A teachers not too worried about the Johnson & Johnson vaccine 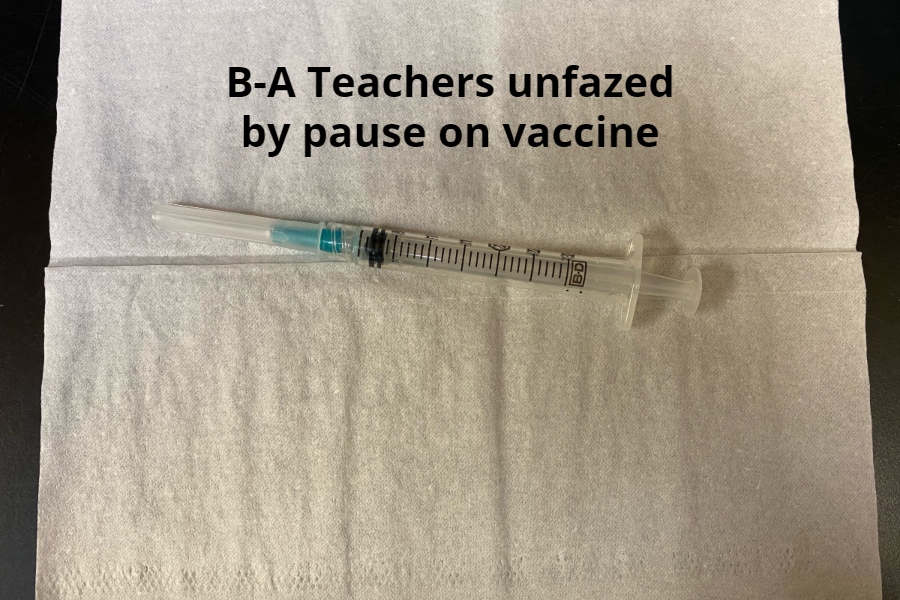 Step by step, inch by inch, Bellwood-Antis and the state of Pennsylvania are getting closer to a return to normal from the COVID pandemic. Gov. Wolf released a statement earlier this week stating that all COVID restrictions would be lifted on May 31, and the mask mandate would be lifted when 70% of adults in PA are vaccinated.

B-A teachers have been on the road to recovery for several months after most were vaccinated in March at the IU-8 in Altoona. The vaccine distributed at that time was the one-shot Johnson and Johnson.

So far there have been 15 confirmed cases of these rare blood clots, as of now three of the women have passed away, with seven more in the hospital.

Teachers at B-A seem unfazed by the Johnson and Johnson pause, happy to have begun the long road back to normal, personally and professionally.

“I was not overly concerned about the halt in production. The statistics appeared to be pretty low,” said Mrs. Dani McNelis, the high school guidance counselor, echoing the sentiments of most members of the BAHS faculty. “Also, by that time, I had already had it, so there was nothing I could do about it anyway.”

Johnson & Johnson was the first vaccine to be pushed out to teachers. but it wasn’t the only vaccine available to teachers. Some teachers chose the J & J vaccine because it was only one dose, but others chose the multiple doses of either the Moderna or the Pfizer. Mrs. Alice Flarend, the physics teacher at Bellwood-Antis, received the  Johnson and Johnson vaccine, but she says she isn’t to worried about what’s going on.

“I did receive the vaccine,” said Flarend. “And I am not concerned at all. The effects are statistically tiny, especially compared to the effects of COVID, which are much higher.”

Mr. Kerry Naylor, an English teacher, also received the  J&J vaccine when it was pushed out to teachers. The troubling news accompanying the product’s pause did not affect his feelings on being vaccinated.

“When I heard they were pulling the vaccine I was concerned,” said Naylor. “But the more I looked into it the more I saw that the actual risk was 1 in a million, and even then it’s mostly affecting a small group of people. So I ultimately feel good about my decision to get the vaccine.”

The IU completed its two-day distribution of the J & J vaccine the second weekend in March, so by the time the product was put on hold in the U.S., most teachers who wanted it had it. For them, they had already gone weeks without feeling ill effects.

“I wasn’t too concerned with the when they announced the halt of the vaccine because the odds of getting a blood clot were very low, and I didn’t fall into the most at-risk group of people,” said Mr. Van Scoyoc. “And the halt didn’t happen until almost a month after I received the vaccine, well beyond the time when any such reactions had occurred. I was happy to be able to get whatever vaccine was available.”

Ms. Denise Shimel, a biology teacher,  had some strong opinions on the distribution pause, saying she felt taking the J & J product off the market did much more harm than good in terms of public perception.

“I could not believe the number of people and the distrust and anxiousness that those six cases out of more than six million people could garner,” said Shimel. “Just pulling the vaccine caused more panic than the public service announcements and truth can begin to overcome now.”

The Biden Administration set a goal of 200 million vaccines within his first 100 days in office, and they have hit that goal. If the US has 70% of the entire population vaccinated, it could reach a point of herd immunity to the virus. As of now roughly 40% of the US population has received some form of the vaccine, but the vaccine is still not completely available to everyone.

Since the beginning of the pandemic over 31 million cases have been confirmed in the US, and over 500,000 people have died from it. Almost everyone in the country has been affected by the virus, or knows someone that has, but the rollout of vaccines at the beginning of 2021 gave a glimmer of hope that the long road to recovery was here.

The resuming of the Johnson and Johnson vaccine came after the FDA and CDC decided that the benefits of the vaccine severely outweighed the risks.

However, with many Americans leery of vaccines of any kind, the fear of deadly side effects may have been enough to keep some people from getting not only the J & J shot, but others as well. One study said as many as 1 in 5 Americans did not want to be vaccinated.

If the fear is repercussions like those that led to the Johnson and Johnson halt, those fears are unfounded, many say.

“Only six out of 6.8 million people had blood clots from the vaccine – less than 1%,” said Myers Elementary teacher Brittany Crain. “You have a greater chance of getting struck by lightning or getting into a car accident than getting a blood clot from this vaccine.”