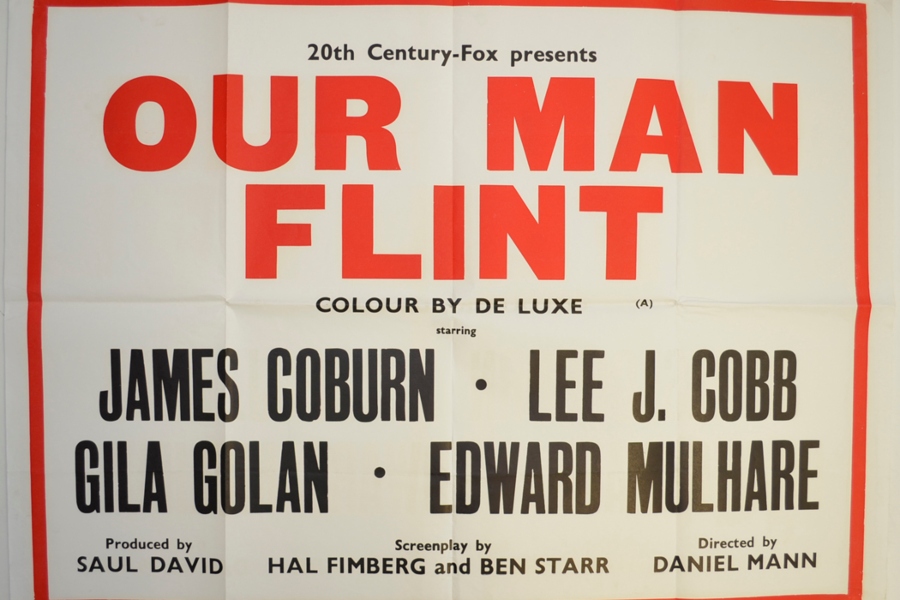 Our Man Flint is a fun and exciting spoof of a spy movie. It was good enough to get a sequel, but like most instances the second movie was not as good. The original however, has some comedy and James Bond style action and adventure. What’s more, Flint is much better than most of the James Bonds. All these things make Our Man Flint a great movie.

Our Man Flint is a comedy version of the James Bond movies. It does not hide this fact. The opening credits is a clear parody of the James Bond openings. There are also a plethora of references within the movie itself. This includes the most blatant shout out being the inclusion of a very minor character called double O eight. As you can see they were trying to be very subtle with that one. These references make Our Man Flint all the better.

This classic 1966 film has much James Bond style action. The concept is that Darek Flint is charged by the leaders of the world to stop some terrorists who are using weather control technology to take over the world, you know, like they do. Flint must travel the world to gain information and stop these monsters. He must fight his way both into and out of trouble. He gets captured, but escapes and saves the day. If you have ever seen a James Bond movie you know the idea. The action and plot is much similar to any given James Bond film, but done much, much better than any of them.

The thing that really makes the movie is Darek Flint, played by the ever great James Coburn. Flint is the coolest man alive in the world of Our Man Flint. He knows martial arts and can fight several masters at once, he can fence several people at once, he is fairly wealthy, he collects art, and teaches ballet all around the world. However most importantly for the purpose of the film he has three beautiful female assistants/companions, four by the end of the movie. He even manages to seduce one of the terrorists, cause why not. All of this is exemplified by the great acting of the man, the legend, James Coburn. James Coburn being of course one of the coolest people of the sixties. He starred in the original Magnificent Seven and The Great Escape.

Overall Our Man Flint is a great movie. Although it is similar to any given James Bond film, it is much better than almost all of them. It has better action and frankly I like how it makes fun of all of the things that don’t really make any sense in the James Bond spy films, which, as we all know, are totally realistic. You should definitely watch this movie as soon as possible.