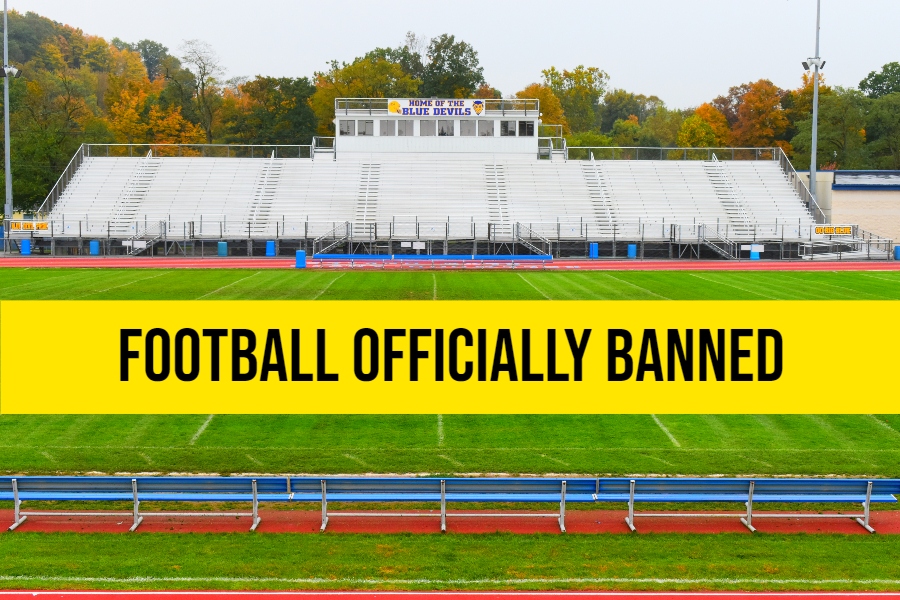 Say goodbye to football at Bellwood-Antis.

Just when you thought the times couldn’t get any worse, football gets banned by schools across the nation, including Bellwood-Antis. The B-A school board released a statement regarding the recent ban.

“It’s finally time we realize how dangerous of a sport football is, and that teenagers shouldn’t be playing and putting their young bodies at risk. It has caused too many injuries and is certainly not worth it.”

Parents and players are absolutely enraged with the ban. Local Blue Devil football fan James Durga had a few choice words for the board.

“This is just ridiculous,” said Durga. “How can I enjoy life without some Bellwood football? People these days are so soft. Back in my day, we played football without these fancy helmets or pads. I’d get my face stepped on by spikes and it wouldn’t even hurt none.”

Research by the National High School Football Association (NHSFA) shows that there is an 11.65% chance for an injury to occur at a high school football game. However, it is not a chance that a player gets hurt, rather a fan. Research has also shown that if an injury were to occur at a high school football game, there in a 95% chance it was by a fan getting into a fight with another fan. B-A football players are trying to signs petitions and get their beloved sport back. However, one player does not seem to mind the ban: junior Jake Martin.

“I don’t care,” said Martin. “All I do is just stand on the sideline.”

When the board was inquired about what they will do with the football field, they stated that it will be paved over to expand the parking lot.

Ever since football was banned, rumors about Blue Devil football players forming the Underground Bellwood Football League (UBFL) have spread across town. Local and state officials are still investigating the case.