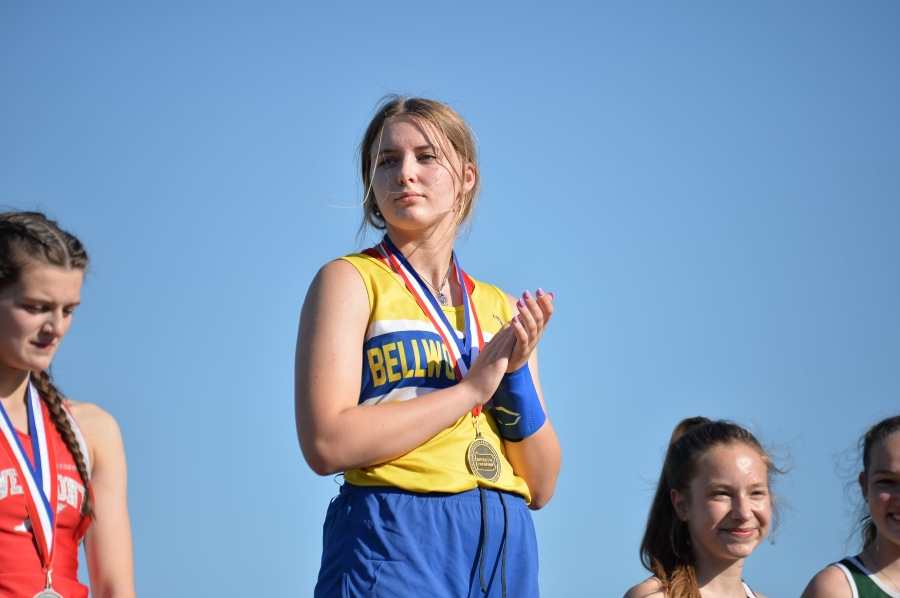 Lydia Worthing stands atop the podium as the gold medal winner in the pole vault at the District 6 2A championships.

Bellwood crowned two district champions at the District 6 2A track and field championships on Tuesday afternoon at Mansion Park in Altoona.

Senior Joe Wertz took first place in the shot put and sophomore Lydia Worthing took first in pole vault. They will both to on to compete at the PIAA track and field carnival in Shipppensburg next weekend.

B-A had a few other athletes place high as well, with several others moving on to states.

Wertz, who has dominated dual meets and invitationals this season, won the shot put by 5 inches, throwing 47 feet 10 inches. He also qualified for states in the discus, where he finished third.

Worthing took first in the pole vault with a jump of 9 feet 6 inches, six inches higher than the nearest competitor.

Senior Kenny Robison placed 2nd in the 400 meter dash with a time of 51.42, just behind Southern Huntingdon’s Keith Moore, but his second-place finish qualified him for states.

Also qualifying were Zach Mallon, who finished third in the long jump, and Hunter Shawley, who was second in the 300 hurdles.