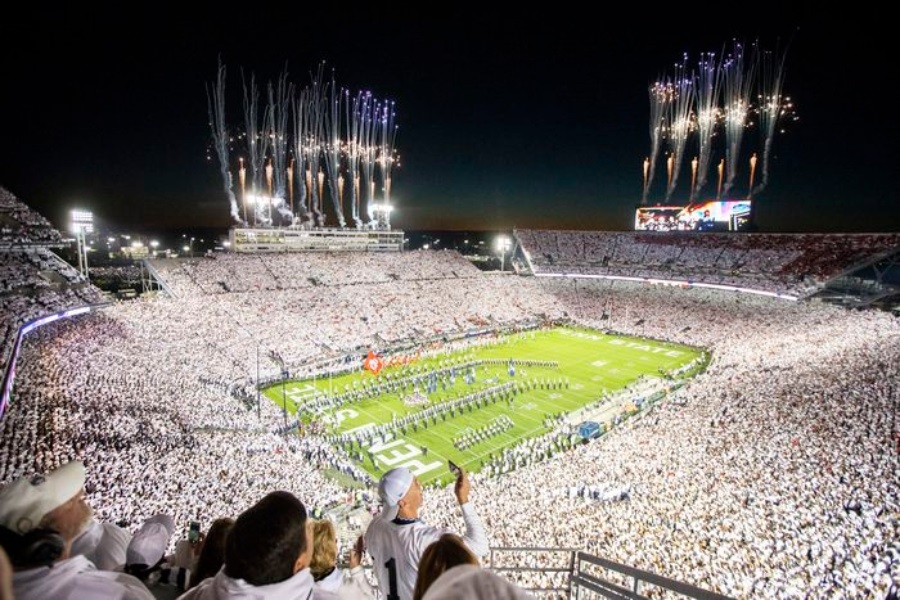 On Saturday night, the 22nd ranked Auburn Tigers led by first year head coach Bryan Harsin traveled to a record crowd at Beaver Stadium to take on the 10th ranked Penn State Nittany Lions led by James Franklin. With 111,000 screaming fans in attendance in the first whiteout since 2019, the night was set to be historic. As it turns out, it was for many reasons. A great game on the field was nearly ruined with atrocious officiating for both sides of the contest.

Auburn’s game plan was simple: rely on your bruising running game and ferocious defensive line and win in the trenches with old school football. Penn State on the other hand came out relying on the quick passing game to their elite playmakers and blazing speed on defense. Auburn was playing the game just how they wanted  throughout the first half, getting chunks of yardage and moving the chains against the Nittany Lion defense, but they could never get the huge play in the running or passing game, which proved to be their downfall as Penn State took the 28-20 win to improve to 3-0 with their second AP Poll top 25 win in 3 weeks.

The game on the field was electric. The Whiteout in Happy Valley is said by many to be the best environment in college football. The weather was nearly perfect in State College, and not much could put a damper on the night except poor officiating from the SEC crew on hand.  Both teams were stiffed by the officials, as almost all big plays in the game were in some way affected by the men in stripes.

In the first quarter, Penn State QB Sean Clifford aired the ball out from a clean pocket to no receiver in what seemed like a simple miscommunication play; however the refs ruled intentional grounding in a call never seen before even by seasoned ESPN analysts Chris Fowler and Kirk Herbstreit. Then, to make matters worse, two plays later Penn State punted on 3rd down after yet another miscue from this officiating crew.

In the Fourth quarter, a targeting call was made against an Auburn defensive back in what was a pitiful call and a power trip from the officials. Also, due to overreaching college rules, the Auburn defensive back was ejected from the biggest game of the season to this point in crunch time and had to watch his team lose from the locker room. However, Auburn got a return favor from the officials when quarterback Bo Nix was brushed on the sideline and a late hit was called. This call gave Auburn 15 yards and an automatic first down, which catapulted an attempted game tying drive for the Tigers. This call showed in a quick instant how much pitiful officiating can affect a football game.

Just a few minutes later, Penn State was essentially handed the win when the officials made a very questionable pass interference call that gave the Nittany Lions with breathing room to run out the clock and end the game. Further, holding calls were being missed left and right for both teams as the defensive lineman were absolutely mugged, and the officials just let it happen.

The officiating crew for this game needs to learn the basics of officiating. You make the blatant calls and let the guys play in big moments. Quit ruining great college football games by throwing unnecessary flags that can ruin a team and their players for the whole season and maybe even affect a football program forever. Recall the 2001 Miami Hurricanes.

Saturday Night was a matchup between two blue blood programs in an special environment on primetime television. The refs didn’t need to make their presence known with an abundance of flags for the game to be entertaining. If you just let the talented athletes play their game, the product on the field will great by itself.