ATHLETE OF THE WEEK: Hunter Shawley 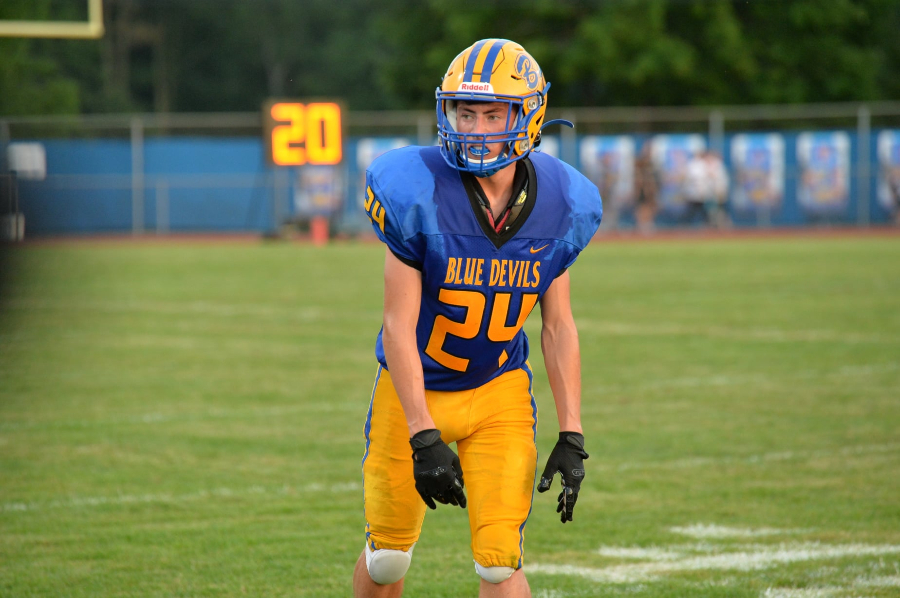 Shawley getting set for a play against rival Tyrone

In the spring of 2021, Hunter Shawley exploded onto the scene for the Bellwood-Antis Track and Field team, placing 6th in the state in the 300 meter hurdles as a junior. Shawley is now doing the same thing in his senior football season, developing as a dangerous weapon in the passing game for the Blue Devil offense. Two weeks ago, Shawley totaled 3 catches for 75 yards and two touchdowns in a 49-28 win over Penns Valley in the District 6 playoff quarterfinal. This performance earned Hunter the Athlete of the Week from the Blueprint.

Shawley has now finished up his senior football season with 13 catches for 205 yards and 4 touchdowns. This is a very impressive season considering it is Hunter’s first year as a starter on the Varsity team. Shawley’s performance this season has really impressed head football coach Nick Lovrich, Lovrich stated “Hunter is a player who has improved each year in our program, this year he stepped up for us on both sides of the ball.” Shawley said that dedication is what led to his standout senior season stating: “hard work in the off-season and 7on7s with the team helped me improve a lot.”

Shawley also is looking to build on a stellar junior track season, while having some pretty big goals for himself in the spring. “I have already been preparing for track, lifting and running throughout the winter, I hope to place first at districts and place even higher in the state finals.”

However, even with his track and field success, football will always hold a special place in Shawley’s heart. “The bond made over the past 4 years with these guys is one that will last forever.” Shawley stated, ” I’m going to miss spending time with such great men, Bellwood football is something I was blessed to be a part of.”