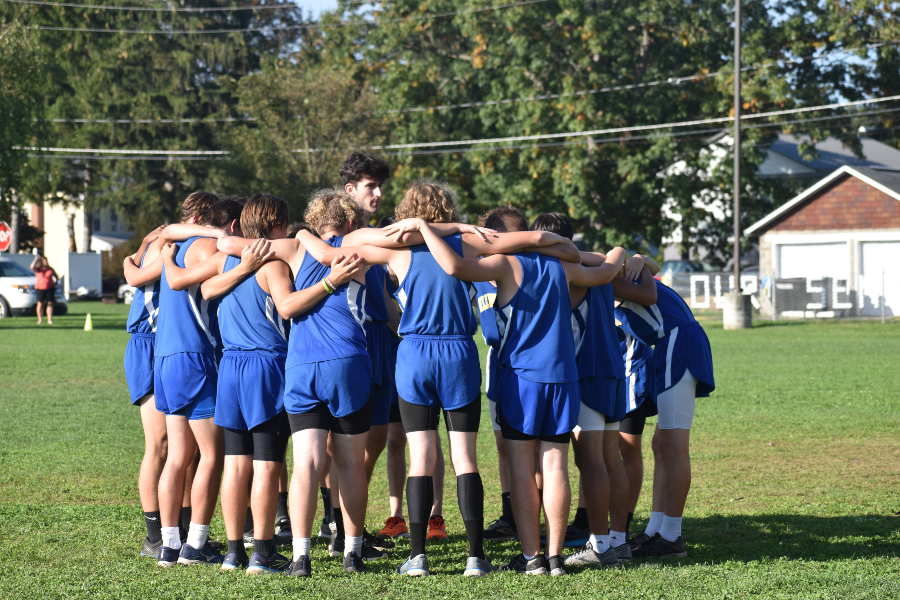 The boys cross country team was one of two championship teams to emerge from the fall sports season.

It was another great year for Bellwood’s fall sports. Although the football team ultimately fell short of it’s goal to win the ICC, two other teams were able to win the championship. The football team, and the volleyball team were both able to host a playoff game for the Blue Devils while also being able to win both of those games.

The Bellwood-Antis Blue Devils started off their season taking on cross town rival Tyrone in the Backyard Brawl. Bellwood came out victorious against the Golden Eagles with a score of 33-13. This marks the third consecutive year Bellwood has won the Backyard Brawl. Bellwood followed up their opening game win with seven straight ICC wins making their record 8-0. Bellwood then fell to ICC foe Juniata Valley, putting Bellwood at 8-1. This game ultimately decided the ICC championship as Juniata Valley held the tie-breaker over Bellwood.  The Blue Devils finished up the regular season with a win against Claysburg making their regular season record 9-1. B-A got the second seed in the district playoffs, which gave them a home game against the seven seeded Penns Valley Rams. Bellwood beat the Rams in a high scoring affair with the final score being 49-28. The Devils then faced off the Richland Rams in the district semis for the second year in a row. Bellwood fell to the Rams with a score of 54-14, putting their final record at 10-2.

The B-A girl’s volleyball team looked to improve after having a disappointing 5-14 season the year before. The Devils started off their season hot with 6 straight wins, while only dropping three out of their first 21 sets. B-A then fell to ICC power West Branch losing 3 sets to 1 and putting their record 6-1. B-A quickly rebounded from this loss putting up 5 straight dominating conference wins, moving their record to 11-1 in conference play. B-A then fell in a non-conference game to Tussey Mountain where the girls had key starters miss the game due to contact tracing. The Devils won 3 of their final 4 conference games, which saw them losing to West Branch. B-A ended their regular season play with a loss to Tyrone, with their final regular season record being 14-5 overall, and 12-2 in the ICC. B-A got to host their first round playoff matchup against Ferndale. The Lady Blue Devils swept Ferndale in the first round of the playoffs, now matching them up with Homer Center. The girls lost this game putting an end to their good season. The B-A volleyball team improved greatly from last year to this year and look to make another jump next year. The volleyball team only lost one starter, and will look to make another jump next year.

After dropping the opening game to a very good Hollidaysburg team, the Tyrone/Bellwood co-op team answered by winning 6 of their next seven games. Their recent success saw them outscoring their opponents 38 goals to just 13 in their last seven games. It wasn’t all good for the Golden Eagles during this stretch as they lost their leader in goals Chloe LaRosa. The girl’s soccer team dropped two more games to Hollidaysburg and Bishop Guilfoyle before picking up a win against the Penns Valley Rams. The Golden Eagles entered a slump at the end of the regular season losing their last five games. This brought the teams record to 7-9 entering a playoff game against the Bellefonte Raiders. After splitting their regular season games this season, the Golden Eagles were able to pick up the win beating the Raiders 2-0. This put an end to their 5 game losing streak, and put them up against the 5 time defending district champion Hollidaysburg Tigers. After a close regulation period that saw the teams tied 1-1, the game went to overtime. The Golden Eagles had a chance to win the game in overtime being rewarded a penalty kick. The kick was blocked by Hollidaysburg’s goalie. Hollidaysburg went on to score the game winning goal in overtime putting an end to the girls season.

This years boy cross country team looked to build off an ICC championship season last year. The team started off with a home win against Cambria Height, and the team followed that win up by beating two ICC opponents Moshannon Valley and Williamsburg. Bellwood accumulated 7 more wins putting their record to 8-0 with their match up against rival Tyrone Golden Eagles. Bellwood was not able to overcome a talented Eagles teaming dropping their first game of the season. The Devils finished off the regular season with a victory over Northern Bedford putting them up against the Mount Unions Trojans for the ICC championship. Bellwood came out victorious winning their second straight ICC championship. This was a monumental year for the cross country team with senior Caedon Poe saying, “ I’m glad we completed our goal of having an undefeated ICC season for the first time in 13 years, and I hope the team can continue the goal next year.”

This years golf team is coming off a 7-3 ICC championship season last year. The golf team opened up their season with an away victory over ICC foe Curwensville. The golf team followed up their opening day victory with two more wins over Claysburg Kimmel, and McConnellsburg. This put their record at 3-0 going into a meet against BG, Hollidaysburg, and Tyrone. The Blue Devils got swept in this tournament putting their overall record at 3-3, while still being undefeated in the conference. Bellwood finished off their season taking victories over Claysburg, and Curwensville. Bellwood finished the season with a 5-0 record in the conference and claiming the ICC championship. The Blue Devil’s golf team had two top three finishers in the conference with Ethan Brown finishing first overall in the conference, and Ethan Johnston finished third overall.