Are students taught enough to be good citizens? 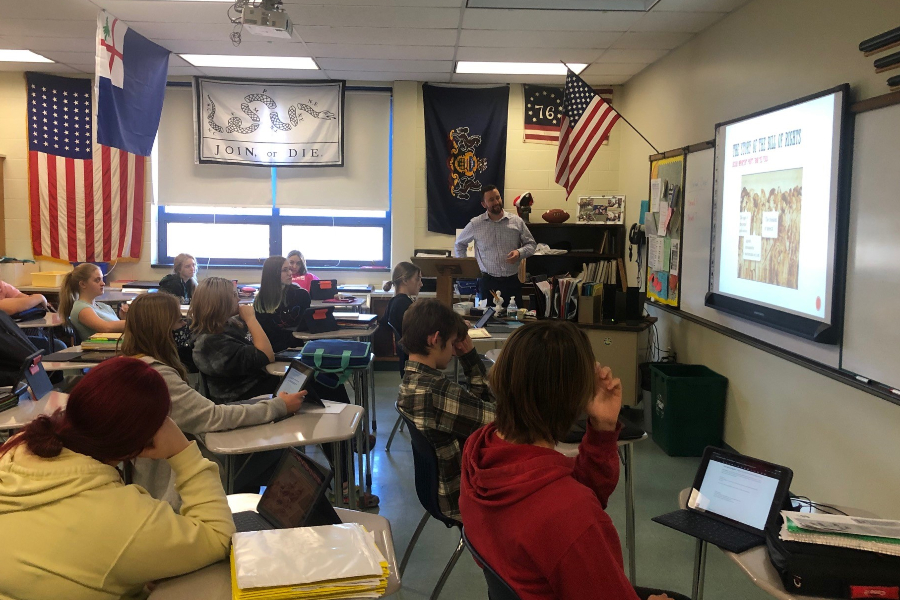 Mr. McNaul shows a video on the Bill of Rights to his ninth grade students.

Students around the United States don’t know nearly enough about their own government. But do they know enough to be model citizens?

Forty-seven percent of 17 year-olds don’t know that each state has two senators.

Those are sobering numbers, and B-A civics teacher Mr. Matthew McNaul says it reflects what he sees in his classroom. Young people today know many of the issues, but they don’t generally have an understanding of how they are solved through government.

“Surprisingly many kids know about what the government does, but not how it works,” he said. “Kids pay attention to current events a lot today and see the government taking actions on certain issues, but they don’t know how the system works or why it works once it does.”

It begs the question of should students be introduced to their government earlier in their school career or is the pace that they are being taught good enough to prepare them for when they need to be a good citizen? Currently at B-A, students receive their overview of civics in ninth grade followed by Problems of Democracy in tenth.

In the 70’s and 80’s kids at the very least had school house rock to learn how a bill becomes a law. In 2021 there are few places in popular culture for kids to turn and social media focuses much more on political division than education.

This is a problem that McNaul feels needs to be addressed by making students more critical analyzers of the news they view.

“When I was a kid, you either watched the news or you didn’t. Then if something interested you, you talked about it with friends,” McNaul said.  “However, today, the kids have access to traditional news, but also more questionable sources of information that can be manipulative.  If they don’t know how to recognize a credible source and misinformation, then these types of stories can be spread more easily by simply sharing them on social media where they will reach a lot of people.”

Mr. McNaul teaches many topics in a year such as why we have a government and the types of governments, reasons for the Revolutionary War, Articles of Confederation, the Constitution, the Bill of Rights, legislative branch, executive branch, judicial branch, and then during an election year he talks about the election and candidates.

Mr. McNaul said he hopes students realize that understanding how government works affects many aspects of their lives, not just their voting choice.

“From gas prices to masks in school, they will soon be able to choose leaders that make decisions about these important topics. But, they need a base knowledge of how our system works in order to more effectively make a difference in their community,” said Mr. McNaul