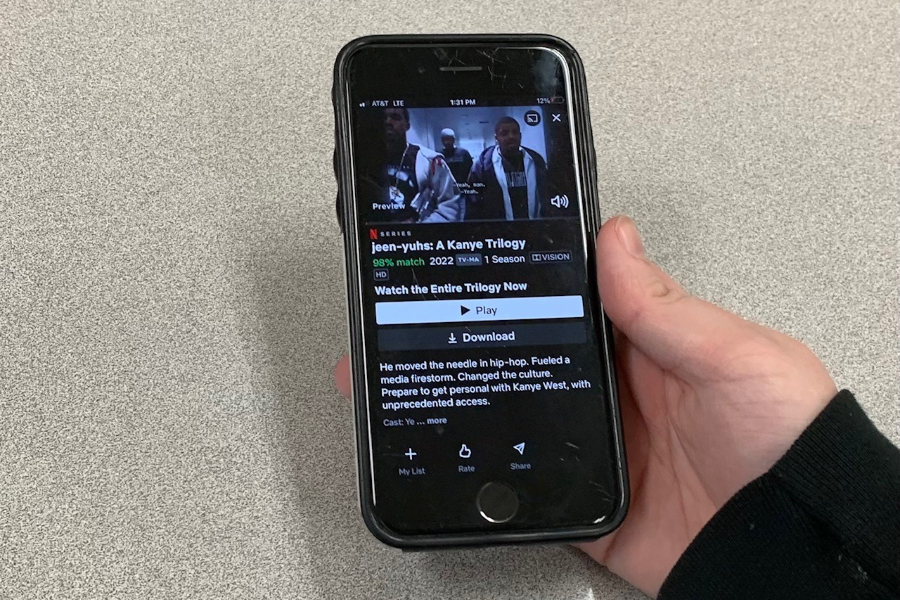 The new Netflix documentary Jeen-Yuhs is well worth a watch.

In a world where rap artist Kanye (YE) West seems to be involved in constant controversy,  Jeen-Yuhs, the newly released Netflix documentary on his rise to stardom, provides a positive light on the seemingly misunderstood artist.

The documentary was started by Kanye himself when he had his good friend and famous director “Coodie”  document his own rise to stardom. The battle for rap industry relevance was very unique for Kanye as he was very famous as a beat maker and producer rather than for his rapping skills. Throughout the documentary, you can see how other artists had no respect for his career as a rapper. Jay-Z was one of the key members of the Roc-A-Fella music label that really endorsed Kanye and him being Kanye’s idol made things come full circle for West.

Another heavy influence on Kanye’s life was his mother Donda West. The relationship between the two was special and the documentary truly captured that Ms. West seemed to be the only person who understood Kanye. West was happy to be around his mother because she was so encouraging and inspiring to him, she was the reason Kanye had  so much confidence in himself.

The documentary features the complete journey to the release of Ye’s debut album, The College Dropout, with never before seen footage from recording sessions for the album. Hit songs Slow Jamz, Through The Wire, Family Business, and Breathe In Breathe Out, all have footage in the documentary and you can truly see how interesting the production process is for artists like Kanye. The confidence that Kanye had in himself and his music was inspiring to see. There were times where he was rapping a future Grammy winning album, and nobody was listening or impressed; he would always tell himself to “trust the vision.”

The reason Kanye was doubted early was because he was an artist who was never seen before in the hip-hop genre. His catchy, upbeat soul music sampling was very contrary to the street hustler/gangster look that most rappers took on to appeal to hip-hop fans. Before supporting him, even Jay-Z had his doubts stating, “He’s never hustled a day in his life. I didn’t see how it could work.”

Once again, the persistence of Kanye would remain a key to his success, as his work began to impress many big time producers such as Pharrell Williams and 88 Keys. The documentary goes in depth about how much of a grind it was to the top. Pharrell Williams heard Kanye’s first album and knew it would win Grammy’s and immediately called him his favorite artist. This kind of endorsement from a figure head such as Pharrell gave Kanye the wiggle room to create a music video for Through The Wire. The music video transformed West into a commercial artist and created large excitement for his debut album.

Kanye ended up achieving his dream and winning a Grammy for Best Rap Album in 2004. Shortly after, Coodie and Kanye had a falling out, which created few footage opportunities from 2007 to 2017, but the documentary does a phenomenal job of covering those crucial years in Kanye’s life that contained the best work of his career. The death of his mother Donda in 2007 changed West as a person, while deeply affecting his music and production styles as well. It also shows the effect that the rap industry had on West himself, with him spiraling into deep depression and nearly quitting music altogether. West had flipped the public opinion on him by committing controversial acts such as accusing George W. Bush of racism and interrupting Taylor Swift’s acceptance speech at the VMA Awards.

The documentary shows that eventually West’s career was taking off and he was regarded as one of the biggest artists in the world; however how nice and cool Kanye is as a person is the biggest takeaway I have from this film. He was described by so many as a great guy and one of the best people they’ve ever met. His recent actions have put a negative reputation on him that I think is inaccurate when describing West.

The true colors of “Yeezy” himself were captured, and if you are a fan of his music or not, this documentary is a must watch for anyone.