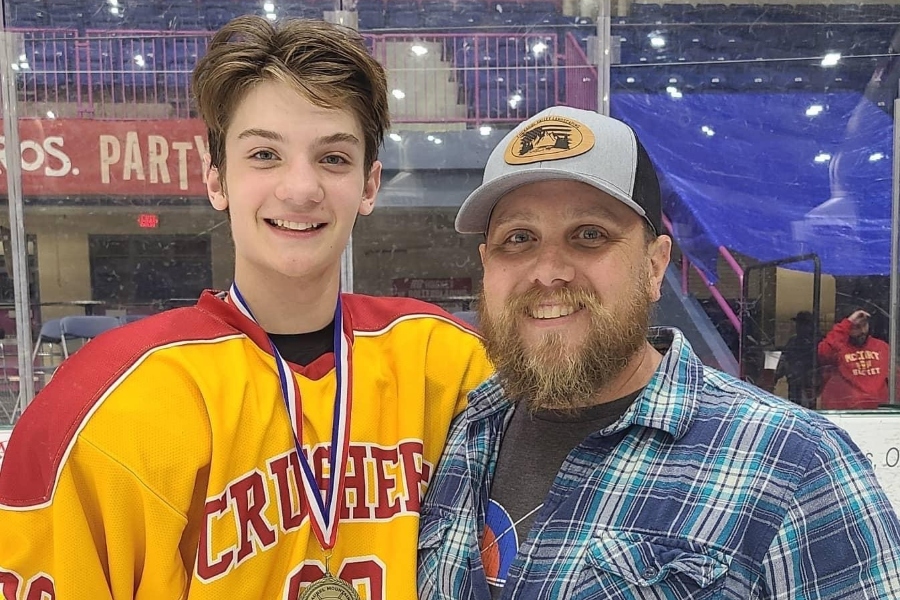 Maverick Baker and his father Justin following a hockey game earlier this year..

Maverick Baker was a young man with a bright future ahead of him.  With an inviting personality and amazing athleticism, Maverick excelled in three sports including baseball and football at Northern Cambria High School, and hockey at Bishop McCort High School, as well as for the Johnstown Warriors.

An aspiring Division I collegiate athlete, Maverick seemed destined for success.  Off the field, he was a gift to his family and friends, for whom he held a deep love.

That made February 11, 2022 all the more heartbreaking.  On that day, Maverick decided to take his own life.

Maverick’s family was stunned.  “He had a bright smile that would ight up a room. We didn’t know,” said Maverick’s father Justin.

Not even Maverick’s stepfather, whom Justin said was a mental health professional, had an inkling of how troubled the 16-year old boy was.

In the aftermath, the Baker family decided that Maverick Baker’s name would live on, determined to start a scholarship and foundation in Maverick’s honor.

“I want awareness,” said Justin, who graduated from Glendale High School before becoming a member of the 82nd Airborne Division. He resides in Riggles Gap. “I think there’s such a stigma attached to suicide. And it you do reach out for help, you don’t get a person (on the other end of helpline-type phone calls).”

The family’s first step in creating the foundation is selling bracelets that have been designed in the memory of Maverick. The bracelets bear the numbers Maverick wore for his baseball, football, and hockey teams.

They are also in the process of forming a board for the foundation.

Along with raising funds for scholarships, the foundation will look to promote awareness and eliminate the stigma surrounding mental health.  “Something has to be done”, said Justin, “I don’t want to sit on the sideline and watch other families go through the same thing my family is struggling with.”

Justin stated that he wishes the scholarship to be a significant amount and that it would be rewarded to individuals who show the same positive qualities that his son lived by.
EERILY SIMILAR
There are other tragic stories across the country eerily similar to Maverick’s, including the deaths of Stanford University’s star soccer player Katie Meyer and a 12-year old Utah boy named Drayke Hardman.  As a gifted athlete, Meyer helped the Cardinals win the 2019 NCAA women’s soccer championship and was described as “bright” by her family.  However, Meyer was found in her dorm room on March 1, 2022, and her death was ruled a suicide. Hardman, who liked magic and wanted to play in the NBA, committed suicide in response to being bullied in school.

“It used to be a rarity to hear about and now it’s everywhere,” Baker said.

When Justin learned of the deaths, he reached out to their families, and spoke to them. It was something Justin felt he had to do because the pain of losing his own son haunted him.

The connection between all of these suicides is there were few clues they were imminent, if any.

Maverick had great success in athletics, with a batting average of .443 as a sophomore as well as being the third leading rusher on the Northern Cambria High School football team.  Off of the field, Maverick had a great support system through his family, by trying to eat dinner every night with phones off, distractions were limited while trying to have important time for family.

“Mav was an athletic, hard-working, respectful young man who loved sports and the outdoors and clearly made his father proud,” said B-A middle school teacher Mr. Partner, who would frequently run into Maverick and his father at practices for Super Swings, a local travel baseball team.  “He was a multi-sport athlete who was able to balance both his athletics and academics quite well and got along with his peers and teammates.  He was heading in the right direction with both his academics and athletics and more importantly with his easy-going personality and kindness he showed others.”

In the eyes of Mav’s family, it all came down to social media.
THE ILLS OF SOCIAL MEDIA
Justin places much of the blame for his son’s death on social media apps like Snapchat and For Your Eyes Only.

Even while trying to avoid the noise of social media, Justin thinks it still had an effect on his son. “(It used to be) when you left school or got off of the bus, it ended.  Now with the instant gratification of social media, there is no escape and it prevents the ability to form coping skills.  It’s a vicious cycle.”

Due to an open investigation, Baker cannot comment specifics because of litigation; however, he believes that an incident on social media, involving bullying, threats, and harassment, ultimately led to a change within his son.

The negative effects of social media have often been debated, but recent efforts have proven how harmful and addictive these sites are to the younger generation.  Countless studies on social media networks have proven that frequent use results in increased anxiety, depression, feelings of isolation, and low-self esteem.

The rise of social media in the 21st century has also been met with a steadily increasing teen suicide rate.  According to the CDC, suicide is the second leading cause of death among people ages 10-24 and has been increasing every year since 2007.  Another study conducted by the CDC found that 18.8% of high school students had seriously contemplated attempting suicide and 8.9% actually attempted suicide.

The results of teen suicide, other than the loss of countless lives and shattered families, runs a combined cost of about $70 billion in the United States.
LEAVING A LEGACY
The need for a foundation after this tragedy seemed obvious to Justin.

“People don’t reach out for help because there’s not enough awareness and they’re afraid of being labeled as crazy,” he said.

“The system is broken.  It’s a terrible cycle where it’s difficult for someone to reach out for help, and if they do, it takes months for that process to actually begin and get the help to the people who need it.”

Justin would like people to be able get help through the foundation, saying , “I want anybody to be able to call the line, speak to a real person, and get the help they need immediately.  I can’t do this again.  If the foundation is able to help only one person then it will be worth it.”

Ultimately, the goal of the scholarship and foundation is to keep the name and memory of Maverick Baker alive, while also impacting the lives of countless students and community members.

“I need this scholarship and foundation because I need to keep moving forward,” said Justin.  “We need to do something.  I would like it to be a significant amount because I want people to care about and make it mean something while also making a difference in people’s lives.  The recipients do not have to be athletes, but they have to embody some of the same characteristics that Mav had.  Being able to change a room with a smile or with an action, and most importantly make the people who are around them want to be a better person.”