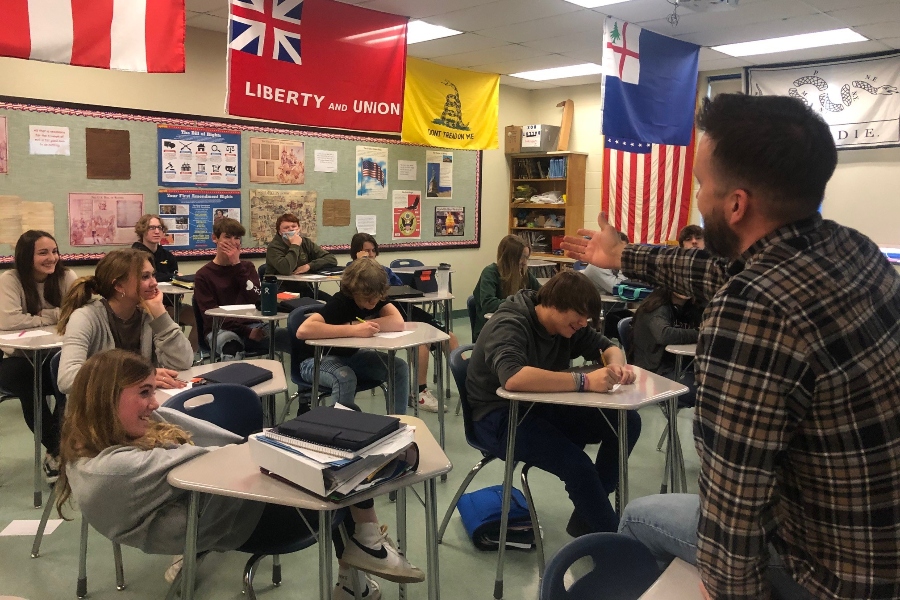 “In diversity there is beauty and there is strength.”

This quote from American author, poet, and civil rights activist Maya Angelou expresses the power of diverse views and cultural settings, but diversity is easier said than done in places like Bellwood-Antis.

In a school setting, it is vital to create discussion and debate, and debate is made easier by having multiple viewpoints. The struggle comes with rural schools like B-A where both racially and politically the population is fairly homogenized, with a 4.7% minority population (1.6% being black students, 1.6% Hispanic students, and 0.5% being Asian students).

In the face of numbers like these, many teachers at B-A have expressed the need for promoting diversity in a school setting.

“I think diversity is an important part of education, and life in general. Being exposed to differing viewpoints, experiences, ideas, and people can give us a better perspective on the world and lead to us becoming better people,” said Mr. Matthew Elder, a teacher of history and Problems of Democracy.

History teacher Matthew McNaul said classes like his can be a prime vehicle for discussing issues of race, culture, and class struggle.

“I think teaching students about contributions of different people can help show the value of others. This is especially true in history classes where a teacher can discuss people like Harriet Tubman, The Tuskegee Airmen, and how they shaped American History.”

However, English teacher, Mr. Kerry Naylor said promoting diversity may be easier said than done. While Brown vs. The Board of Education overturned Pressy vs. Ferguson and assured a form of racial integration in schools, there are many places like B-A where the population itself remains homogeneous not only racially but culturally, politically, and religiously.

“Even if Bellwood wanted to be diverse, the fact remains the school is almost 100% white, middle-class, and conservative in value,” Mr. Naylor said. “So for us, it’s not a matter of being diverse but creating an environment where diversity is embraced.”

In an effort to promote diverse cultures and ideas, Mr. Naylor exposes his students to the works of African American authors like Langston Hughes and includes stories by authors like Judith Cofer Ortiz, like “American History.” In his college and high school class students read the arguments of Malcolm X, while all students in his classes read weekly Articles of the Week, which tackle issues like trans athletes in sports and police violence against African Americans.

Clearly, diversity goes beyond race. For Mr. McNaul, diversity encompasses not only issues of color and identity but those of thought, as well. He prefers to help students explore these issues through classroom discussion and debate.

“My class is very discussion based, so I like to discuss topics from various angles,” he said. “For example, when we discussed the Second Amendment, I had the students look at different pro and anti-gun statements and develop arguments for and against each. This forced them to critically think about a side they might disagree with. Then from this, we had a larger discussion about the merit of each argument.”

In the eyes of Mr. Elder, tolerance of other people and cultures is just as, if not more important than diversity itself. There may be need, he said, for not just tolerance, but acceptance.

“I’m not really a fan of the word ‘tolerant’ since I feel like it has a negative connotation attached with it,” said Mr. Elder. “When I hear the word tolerant being used, it usually doesn’t lend itself to meaning a person is accepting and understanding, or even respecting another person. Typically when I hear it being used, a person simply means they’re ‘putting up with’ another person – almost begrudgingly.

With that being said, I think a person certainly cannot become accepting and understanding of others who have differing opinions, ideas, perspectives, and experiences without experiencing diversity. Diverse experiences help a person to grow.”

“In a place like B-A, diversity often begins within its acceptance of different learners, which can be an important step in promoting diversity in general,” says Mr. Stewart.

Accordingly, Bellwood-Antis has taken great steps in encouraging the acceptance of different learners, creating a unified Bocce team, promoting spirit weeks dedicated to inclusion, and an developing an Inclusion Club.

In the end, while teachers at B-A believe that diversity is beneficial, it might be easier said than done form the perspective of race, ethnicity and gender, but open lines of communication may be the best tool for promoting diversity in general, which could include a multitude of ideas and beliefs.

“We can’t pull diverse views and cultures out of thin air, but we can prepare our students, many of whom matriculate to colleges like Penn State and Pitt or move to places where there are other ways of thinking and living, to be tolerant and open to new ideas,” Mr. Naylor said.

Exposure does not create acceptance, but it may help pave the way.

“It helps show kids that world is bigger than what they experience here in Bellwood,” he said.  “And, its important to show this to kids so they will become adults who are better at working with others and problem solving complex issues by looking at a problem from a variety of angles, not just how they think the problem should be solved.” says Mr.McNaul