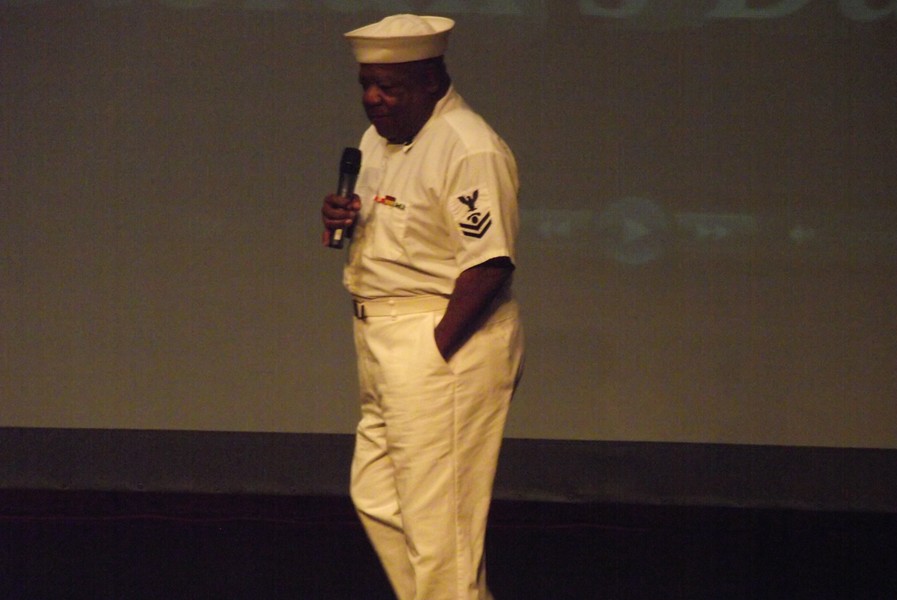 The Rev. Paul Johnson kept the crowd's attention with his dramatic delivery style and amazing stories from his time in the armed forces.

Guest speaker Reverend Paul Johnson won over the crowd with his speech. The recipient of two kidney transplants, he said, “I am a black man with a Caucasian side and a female side.”

A Vietnam Veteran, Johnson told how in 1968 America was divided over Vietnam and assassinations and racial conflict. One of his close friends, William Clark Jr., died in the Vietnam War in 1972.  Johnson said 20 sailors were killed when the ship came under attack.

He added, “Remember who you are – We all are the protected.”

One thing he wanted the audience to remember is, “We’re all the same. We all bleed red.”

After the Pledge of Allegiance the National Anthem sung by our High School Chorus.

Our High School Chorus sang “God Bless the U.S.A” and “Song for the Unsung Hero” in honor of our Veterans.

Lions Club representative Mr. Donald Mills then gave a presentation of the Veterans Day Essay and Poetry Winners. Sophomore Abby Luensmann was the essay winner and junior Marissa Panisiti was the poetry winner.

The crowd gave a Thank You to all Veterans who attended the assembly, followed by the retirement of the colors to end the program.