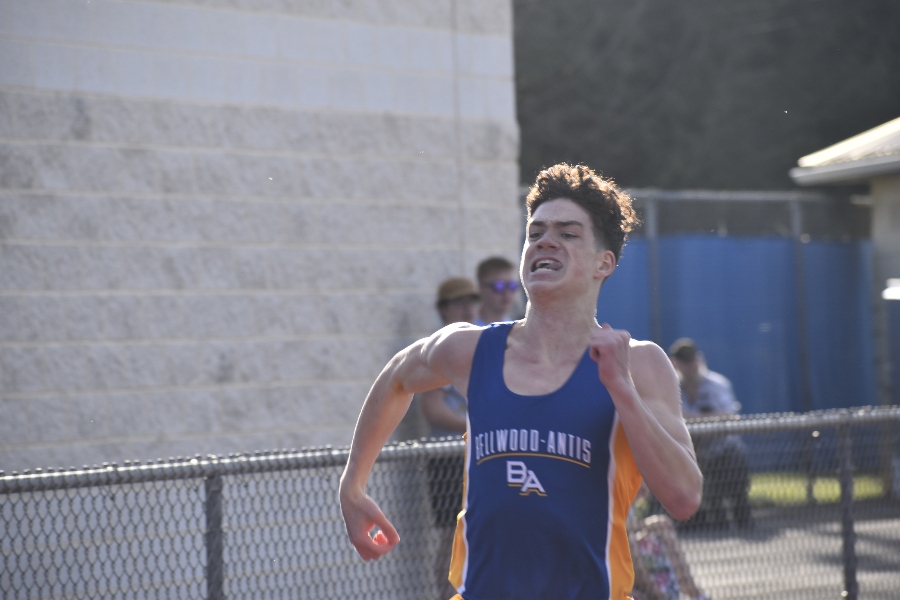 Sean Mallon sped his way to a win in the 400 at the Bellwood-Antis Invitational.

The Bellwood-Antis boys and girls track and field teams had impressive showings at the annual Bellwood-Antis Invitational, hosted Monday at Memorial Stadium with more than 500 area athletes competing. Both fought their way to top-three team finishes from a stacked field and each team had a strong group of ribbon winners.

Hunter Shawley is looking to break a school record that has been held by Zach Sinisi since 2013 saying, “I’m going for the school record, and in order to break it I’ll have to push myself.”

Out of the 21 teams that attended the invitational Bellwood boys were able to capture second, just edging out Bedford. Central Cambria was the overall champion by a wide margin, outdistancing the Blue Devils 134-75.

“Our guys really stepped up,” said Coach Nick Lovrich. “We edged out Bedford after they had handled us in the first meet of the season, which shows how much we have improved. We talk about peaking around Districts.”

The Devils showed their depth with some important second- and third-place finishes, as well. Cooper Keen finished just behind Mallon at No. 2 in the 400, while B-A’s 400 relay team placed third. Shawley placed third in the 110 hurdles and Dylan Andrews was third in the pole vault.

It was the first time both Mallon and Keen were placed in the 400 meter run, even though they are the top runners in that distance according to their splits in the 1600 relay.

Mallon credits their success to hard work in practice saying, “In practice we always push each other so that was what we we’re trying to do. Coach says we should make each other better.”

On the girls side, the Lady Blue Devils track and field team took third place. Bellwood trailed champion Bedford and runner-up Tyrone in the standings.

Bedford totaled 123 points, followed by Tyrone at 95, and Bellwood-Antis with 61.

The Lady Devils crowned one champion, with junior Lydia Worthing taking top honors in the pole vault with a leap of 9-foot-9.

A District 6 champion as a sophomore, Lydia has been happy with her progress adding, “I’ve definitely improved from last year. Given how cold it’s been this year, the season has gone pretty well. I would have liked to PR but a win is a win.”

In distance events, Lexi Lovrich placed second in the 1600 meter run, and third in the 3200 meter run. In hurdles, Sophia Nelson led the Blue Devils by placing fourth in both the 100 meter hurdles and the 300 meter hurdles.

Chelsea McCaulsky and Alyson Partner earned valuable points in the field. McCaulsky was second in the javelin and Partner was the runner-up in the shot put.

The Lady Blue Devils found a lot of success in relays, placing fifth in the 400 and 1600 meter relays, while taking second in the 3200 meter relays.