The Blue Devils Crush the Crushers 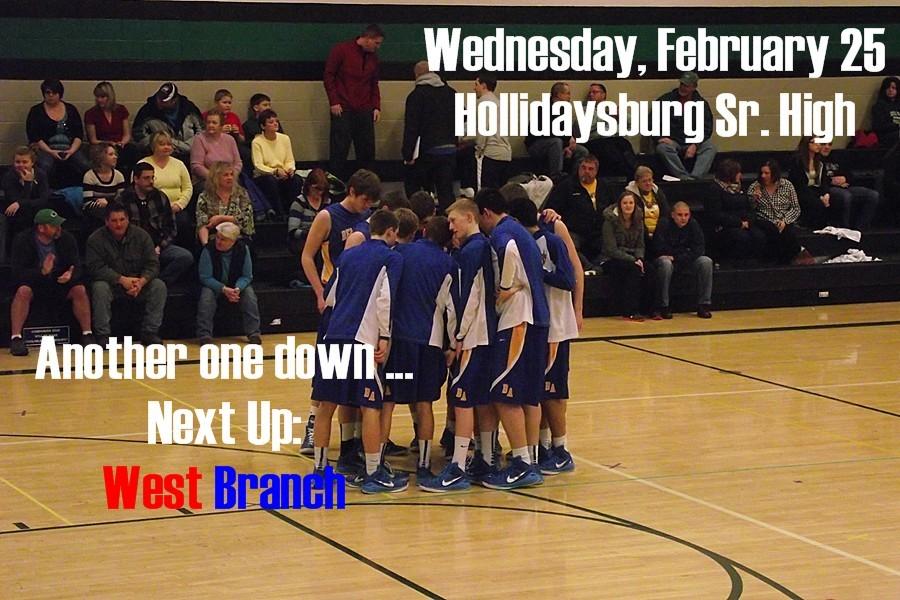 B-A takes on West Branch tonight in the District 6-AA semifinals at the Hollidaysburg Senior High.

On Monday Bellwood-Antis Blue Devils went up against the Bishop Mccort Crushers in a District-6 quarterfinal round playoff game at Central Cambria High School.

The Blue Devils and the Crushers went back and forth the entire game, but managed to come out on top with a 59-57 victory.

The Blue Devils came out a little slow, but managed to make the score 14-13 at the end of the first quarter. During the second quarter, the Crushers overtook the Blue Devils to go ahead 29-27 at half time.

“It was a slow start,” said Ethan McGee. “We were playing sluggish and then realized that it was an all or nothing game.  So we came out in the second half with a lot more intensity and pulled out the win.”

Nathan Davis agreed.  He said, “We came out a little slow; probably because of being off for a whole week.  But it was a great atmosphere and the fans helped us back in the game.  Everyone stepped up and played great.”

A fourth quarter surge put B-A ahead for good.

Davis led all scorers with 26 points and had a double figure by  grabbing  11 rebounds.  Freshman Trent Walker really stepped up and helped out with 12 points.

The Blue Devils had a total of 10 three pointers; four of which came from Davis, four from Walker, and one from both Burch and McGee.

The Blue Devils, whose record is now 19-6, will take on the West Branch Warriors, the highest remaining seed in the class AA tournament on Wednesday at the Hollidaysburg Area High School gymnasium.

“It’s going to be tough playing the Warriors a third time, but I think we can beat them again,” said a confident McGee.

Davis added, “Beating West Branch three times is going to be tough; but I know we can do it with BDN in the gym!!”

It is going to be a good game so make sure you come out on Wednesday to support your Blue Devils.