Mock Trial: Bigger than ever this year!

Bellwood making big steps forward this year by adding to the club roster. 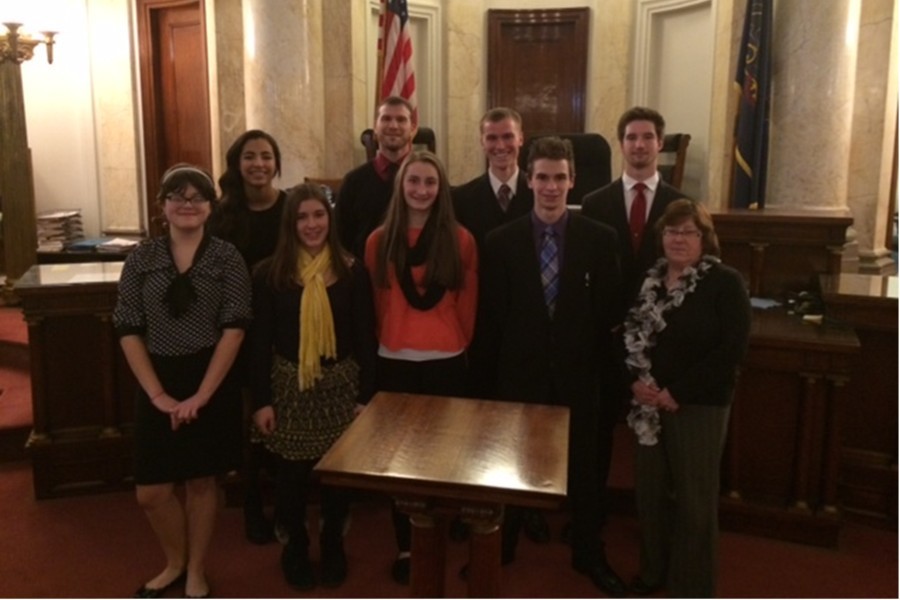 “Mock trials have proven to be an effective learning tool for students in all grade levels. It helps students understand the law, practice critical thinking, and gain greater confidence with public speaking by playing the roles of attorneys and witnesses in a fictional criminal or civil trial. Participants experience first-hand the difficulties that judges, lawyers, and juries face in determining which facts are relevant and how legal arguments are effective.” – the PA Bar Association

The team went 0-2 this season. They lost to Central and Bishop McCort.  B-A’s loss to McCort came on a technicality. After the trial, points were deducted from B-A’s  score card for exceeding the time limit.

“After a slow start, the mock trial team really came together at crunch time and worked some long hours after school and on the weekends to put the finishing touches on their case,” said Mrs. Padula, who advises the team along with Mr. Naylor. “I think the kids who had done mock trial in past years, really stepped up and helped the newbies find a place on the team.”

Many of you might be wondering, “What exactly is a Mock Trial?”

A Mock Trial is an act or imitation of a trial. Every year the Pennsylvania Bar Association creates a case for  schools to debate. This year’s case was a murder trial in which a pledge master at a prestigious university allegedly hazed a freshman, leading to her death.

Mock trial teams assign students to fill the roles of lawyers and witnesses and spend months examining and memorizing testimony and evidence in the case.

This year B-A had two separate teams for prosecution and defense, which meant more focused and individualized practice time for each group.

“This is only the second year Mr. Naylor and I have advised this activity, but I’ve seen the members improve since last year, especially with their line of questioning and objections,” said Mrs. Padula. “I’ve really enjoyed working with the Mock trial members and am looking forward to next year.”

Mock Trial is very beneficial to students.  Some of the benefits in being in Mock Trial are: public speaking, critical thinking, and the art of forming a persuasive and cohesive argument.  Another benefit is improving your memory.  When students are given the material to mock, they have to remember everything about their trial. If they don’t or get something wrong about the trial, the opposing team can call them out on it.  Also they have to memorize the material in less than a week or month.