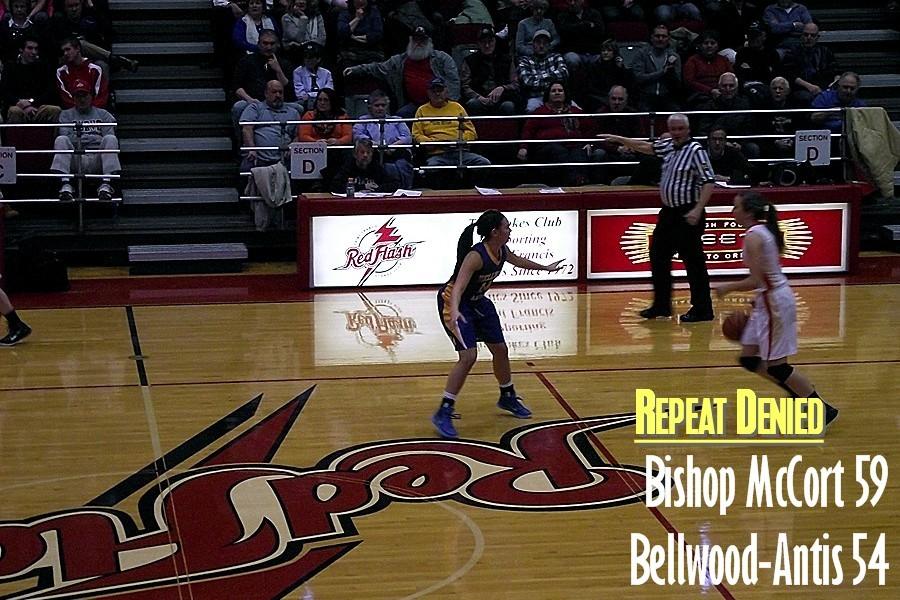 Ana Hollen was gritty as usual, but shots didn't fall like they normally do for the Lady Devils Saturday against McCort.

Saturday evening the Lady Blue Devils took on the Bishop McCort and had a disappointing fall, losing 59-54 in overtime to the Lady Crushers in the District 6 AA Girls Final at Saint Francis University’s Degol Arena.

The Lady Blue Devils are still alive in the PIAA playoffs and will face Everett Friday at 8 at UPJ.

By the end of the first quarter the Lady Crushers were up by three.  Then, the Lady Devils made their last four shots of the second quarter and pulled ahead, making the score 24-15 at halftime.

After halftime, the Lady Blue Devils seemed to be off their game.

During the third quarter the Lady Blue Devils managed to stay ahead 41-37, but were still cold from the floor, making just 7 of 24 attempts.

B-A held the lead most of the fourth quarter McCort tied the game on foul shots by Haley Thomas with 20 seconds left. At the sound of the buzzer to end the fourth quarter the Lady Blue Devils and the Lady Crushers found themselves tied at 48-48 forcing the game to go into overtime.

The Lady Blue Devils had 31 points from the back court of Hollen and Swogger.

Hollen led the team with 17 points, but fouled out with 10 seconds left in overtime.

Swogger followed close behind her with 14 points.  Anna Lynn came off the bench and added 11 points to the Lady Blue Devils score.  Kelly Leamer also sunk 10 points of her own.

This was only the second time the Lady Blue Devils have lost in 26 games this season, making their record 24-2.

On Friday the Bellwood-Antis Blue Devils took on the Central Cambria Red Devils at the Hollidaysburg Area High School Gymnasium.

The Blue Devils played hard and would not let up against the Red Devils, coming out on top with a 62-52 victory.

The win earned B-A a trip to the PIAA playoffs. They will face Redbank Valey Saturday at 2:30 at Clarion University.

After a break at halftime, the Blue Devils were still going strong. During the third quarter Bellwood-Antis was up 49-39.

Once again Nathan Davis showed his skills in leading the team with 23 points.  Joey Padula followed close behind with 14 points.  Jarrett Tanneyhill also stepped up his game and helped the team by adding on 12 points of his own.

“We have a hard week of practice ahead of us. We need to work on some things that we have gotten a bit lax. We are capable of playing so much better.  The good thing is the last couple of games we have been learning how to work the clock.  We need to relax and hold on to the ball better. Tonight we broke their press and turned the ball over,” said Blue Devil Coach Gerwert to Chuck Banas, a Daily Herald Sports writer.

The Blue Devils record is now 20-7 for the season.