The color of a controversy 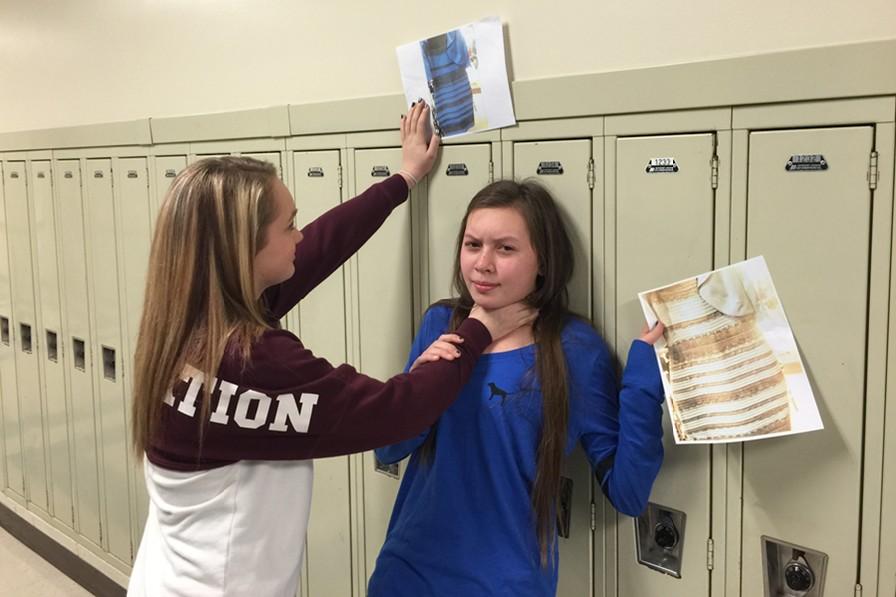 Was it blue and white or black and gold? That was the controversial question last week when students like Alexis Gerwert and Tina Hollen were ready to throw down over what they saw.

We should all know about this infamous dress by now.  We’ve seen it on Facebook, Twitter, Tumblr, and Instagram.  It has sparked a lot of debate over the last couple of days. But who would have thought that a dress could almost divide a nation into the Black and Blue or White and Gold team?

Caitlin McNeill definitely didn’t think that when she posted this picture on her Tumblr Thursday. McNeill was just simply trying to end the debate her and her family were having about the color of the dress. She posted it on social media to try and find the answer, but got way more than what she asked for.

Within hours of her post, the dress picture got more than 1 million retweets, likes, and reposts. People from all over (even celebrities) wanted their two cents to be heard about what colors they saw.

We know now that it is blue and black, but what colors do you see?

Do you see that the dress is obviously black and blue or are you with the white and gold side?

Does the dress change with different lighting? Or does it change with your mood/ emotions?

Senior Dan Hollen said that he saw blue and black.

“I think I see black and blue because I look for the darkness in a color,” Dan said.  “I usually don’t look for the brightness in colors.”

Another senior, Jason Thompson says that he does see black and blue… sometimes… and other times he sees gold and white.

On the white and gold side are seniors Amanda Partner and Jessica Wertz, who said they think that they see it being white and gold because of the lighting and how their eyes perceive the colors.

Now you may or may not agree with what colors these people are seeing but the debate can finally end!

An article by Victoria Woollaston from MailOnline broke it down like this, with help from Andrew Lotery, a professor of Ophthalmology in the Faculty of Medicine at the University of Southhampton:

The difference in perception could be due to lighting conditions, the device the image is being viewed on and even a person’s age and gender. He explained that everyone has different combinations of the genes that create the sense of colour for red, green and blue and because these genes are on the X chromosome, women tend to have more variations. As a result, women have a more dynamic range of colour so may be more susceptible and sensitive to specific colours. This may explain why women flip between seeing the different colours, and men typically don’t …

Many work by contrasting images and colours, and this contrast could explain the differences seen on the dress. For example, it could be that if the lighting conditions slightly changed, the person viewing the image is getting more stimulus on the blue photo receptor, for example, than the red.

Still too complicated? Watch the video “What Colour Is This Dress (Solved With Science) for a clear and concise answer to why the dress is, in fact, black and blue.