All we need is just a little patience

Kids are in a hurry now like never before 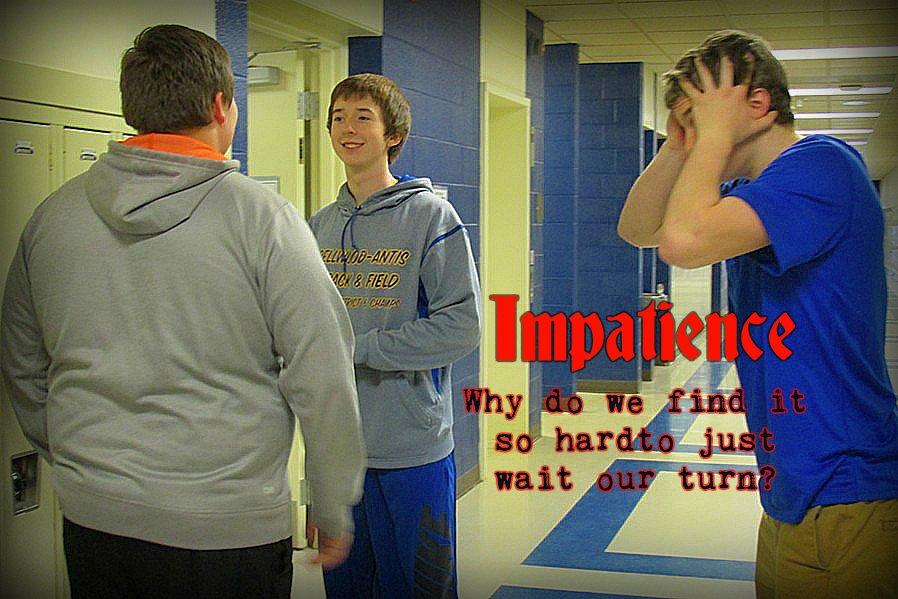 Waiting to get into your locker while friends chat - one more excuse kids find to get impatient and frustrated.

Freshman Skylar Grossen gets agitated when people walk too slowly in the hall way.

“It makes me want to push them out of the way and tell them to be faster because there is no point being slow if they are going to be late for class anyways,” says the irritated girl.

People just don’t have the same patience they once may have, and there are many factors, like exposure to technology. The fast pace of today’s society is warping our internal timers. Everything that is actually fast is being perceived as too slow. Waiting 10 seconds for something feels like an eternity, but considering there are 86,400 seconds in an entire day it isn’t that long.

Junior Autumn Pardoe says slow traffic bothers her the most. She says, “It makes me want to get out of the car open their door and punch them in the face.”

Even as recently as 2009 we had no problem waiting two seconds for a computer to complete a task or in 2006 waiting four seconds. Obviously we aren’t going to die because of these things going slow, so why are we acting like it?

Freshman Bryce Hornberger hates when the internet works slow. “I hate it, but I accepted because our house is in the woods. I get frustrated if a twenty minute video takes thirty minutes to watch and I was to do other stuff,” says the freshman.

Impatience is a heritage from our evolution. When we didn’t have technology and we had natural dangers to face such as predators or weather, we needed to be impatient so we didn’t die from spending too much time on an unfulfilling task or goal.

A goal could be anything from finishing a computer task like an Internet search to getting somewhere you want to be, which is why slow people are bothersome to those who are impatient.

Another junior Zac Taylor says when his internet works slow, “I get frustrated and annoyed with it because I am used to it working almost instantly.”

Junior Adra Estep say this about slow people in the hallway, “I want to smack them or yell at them to tell them to move, especially groups of kids in the middle of the hallway. I just want to be a mean person to them.”

We can restrain our slowness rage and regain patience!

Obviously will power is always an answer, but will power only goes so far. After using will power for a while all of the pent up rage can come out as one big tantrum which isn’t really solving the problem. Another drawback is that people become more prone to next temptation, such as waiting in line at the grocery store and you’re using all your will power to be patient and silent in line that you buy a candy bar on the side shelf.

An additional strategy is do a short writing exercise about what you are grateful for and how it is important in your life. It helps to remind you of the value of being a collective human being and importance of not being brute.