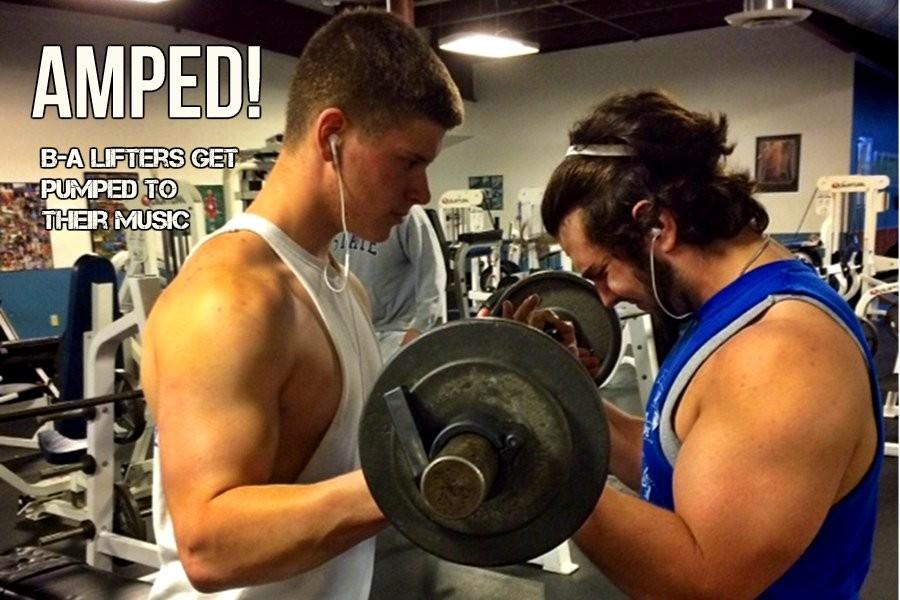 Tyson Miller and Tyler Shultz listen to their workout music as Shultz goes for max reps.

Music is always good.  It can make your day better just by listening to your favorite song or artist, but studies have shown that listening to music can actually improve your workout performance!  Now you may have heard that before, but do you actually know the science behind the music?

Sit back, relax, and learn more about how you can improve your workout.

To make a generalization, fast songs with strong beats are usually stimulating, so they are in most people’s workout playlists. In a survey of 184 college students, for example, the most popular types of exercise music were hip-hop (27.7 percent), rock (24 percent) and pop (20.3 percent).

A recent study has found that not just by listening, but controlling and creating music in one’s time pace has a profound effect on perceived effort during a workout.  Some psychologists have suggested that people have an innate preference for rhythms at a frequency of two hertz, which is equivalent to 120 beats per minute (bpm), or two beats per second.  When someone taps their fingers or walks, they unconsciously get into a rhythm of 120 bpm.  An analysis of more than 74,000 popular songs produced between the 1960’s and the 90’s had a prevalent pulse of 120bpms.

Music distracts people from things like pain and fatigue.  It can elevate your mood, increase endurance, reduce your perceived effort and may even promote metabolic efficiency.  When listening to music people run farther, bike longer, and swim faster than usual- often without even realizing it!

Maybe that’s why senior Ryan Bouslough uses it for his intense workouts.

Even people here in Bellwood workout differently and listen to a verity of music.  From pop music like Katy Perry to rock-in- roll like Fall Out Boy.

Senior Alexis Mayhue likes to jam to Maroon 5.  “I like the upbeat, really fast pace of his songs.  I usually aim for his genre of music on ITunes.”

Rumor had it that Cameron Wood listened to One Direction when he went for gains, and the senior confirmed it.

“I listen to them for lifting, when I run, just about anything,” he said.

If you can’t find music to work out to you can get on the apps like Songza and Jog.fm.  Both of these apps are designed to help people music that will help them through their workout.  (Seriously check out these sites!)

Songza changes throughout the day from morning songs to late night songs.  You can also match the music to your activity.  Like barbecuing, coding, driving, and of course working out.

Jog.fm finds you songs that depend on your pace and bpm.  It also determines your song depending on your workout whether your running, walking, or cycling.