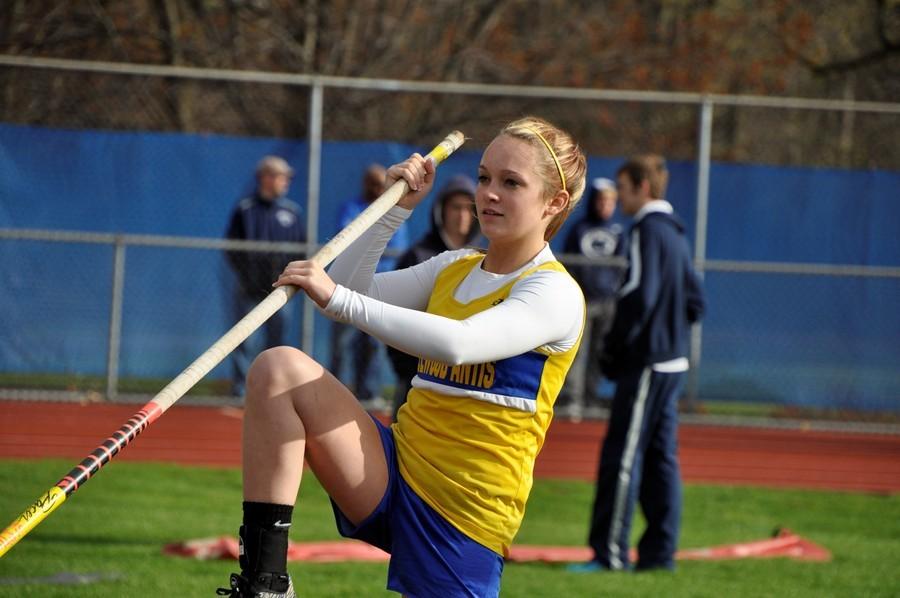 Freshman Alexis Gerwert won the girls pole vault at the ICC Meet, and the boys team came home with the team title.

Kyler Lardieri got his chance to be in the spotlight when he was voted boys outstanding runner after his win in the open 800 at the ICC Championships yesterday in Loysburg. His time was 2:05.86.  He is the poster child for the Blue Devils’ philosophy because he runs in all three relays.

“I feel really good about winning the 800. It was the first time I ran the open 800, so I didn’t really know how to run it.  I stayed back until the last 200 then I made my move and went around everyone and finished first.  It was a good day and win for not running that race before,” said Lardieri.

On the girls side, Selena “Nina” Damiano was named the outstanding thrower with yet another record-setting performance.

The boys pulled off their victory without the advantage of a double individual winner.

The 1600 relay team of D’Angelo, Lardieri, Davis, and Jake Burch joined together to cross the finish line first with a time of 3:36.84.

Jake Burch placed 4th in the long jump and 5th in the triple jump.

Nina Damiano continued to set another record.  Nina was a double winner by set a meet record in the shot put and won the discus.  Nina took home the girls outstanding thrower.

“I’m happy with the win but I am not satisfied with my performance.  I feel that I could have done better,” said Gerwert.

Luensmann placed 6th in the 100 hurdles.