Taking it too easy

Parent coddling is becoming a bigger problem in youth sports 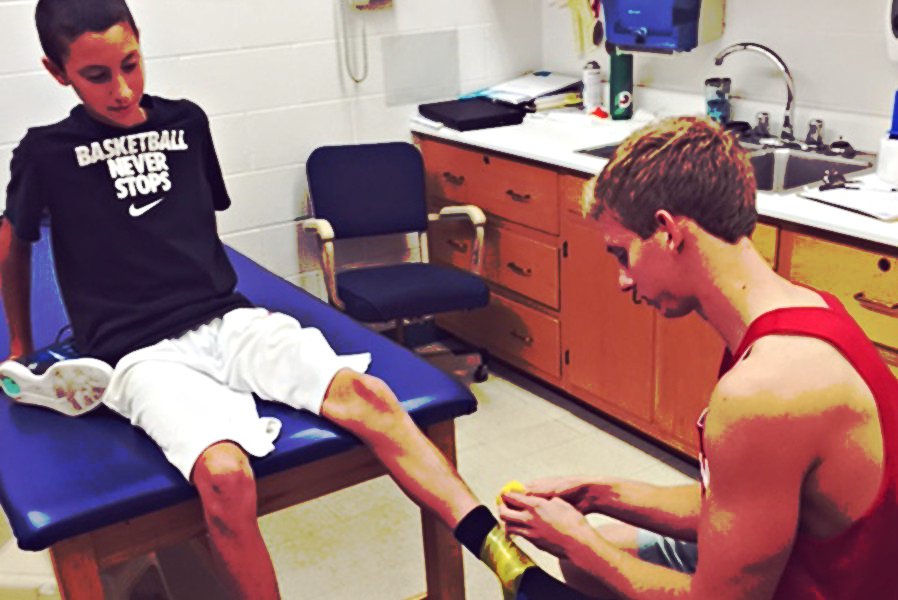 Mason Yingling needs to have his ankles taped before every practice. While this may seem like coddling to old-school athletes, it's nothing compared to parent coddling prevalent in youth sports today.

How many times have we heard this outrage or some variation of it?

Parents coddling their children has reached new heights and it certainly isn’t a good selling point for sports. One recent article suggested 10 tips for recognizing if you are a coddling sports parent.

It happens in all sports, for both girls and boys. Parents may think their children are better than they really are and deserve playing time over others, while failing to realize is that once kids reach high school level athletics, it’s not about equal playing time: the best players are put on the court or field.

Junior Ethan McGee is a standout athlete playing three sports at Bellwood-Antis, and he has seen first-hand the coddling of his teammates.

“It’s definitely important for students to participate and work hard in their respective sports, but being realistic is also necessary,” he said. “If you have what it takes, then the coach will put you out there; if not, then you have some incentive to work harder.”

Often parents misconstrue the idea of supporting their children, and it turns into the mindset that “My child can do no wrong!”

Junior Joe Padula is a two-sport athlete and has seen occurrences of this throughout his career.

“Yeah, I can remember as far back as minor league baseball, parents making trouble because their son wasn’t playing enough,” Joe recalled. “It can definitely be distracting, having parents in the stands who think their child can do no wrong.”

High school math teacher Mrs. Allison Stinson was the head varsity girls basketball coach, and is still a softball pitching coach today. She believes that parent coddling can have a negative effect on the child.

“First of all, it can really hinder the development of the athlete because of the inflated-sense of accomplishments he or she gets,” Stinson said. “It can cause the player to not work as hard because they think they are already the best.”

She also added that players can give off bad vibes toward their coach when they develop an “I-can-do-no-wrong” attitude.

Mr. Nick Lovrich, who has coached girls basketball and is currently the head track and assistant football coach here at B-A, agrees that there is no room for parent coddling in sports because it erodes team play. On this level he believes it is about being part of a team.

“It can cause kids to lose sight of the team aspect, and be more focused on their own succes,” Lovrich said. “It can also really hold the kid back from developing into a well-rounded athlete.

“When parents feed their children these inflated notions, they lose sight of complying to team goals,” he added.

Mrs. Lorie Nyman is the high school gym and health teacher. She said over-interference in youth sports can be work in two ways.

“There seems to be two ends to the spectrum for something like this,” she explained. “Either you can’t do anything right for your parents, or you can do no wrong. It is extremely important to find the right balance between the two.”

Mr. Kerry Naylor has coached at Bellwood in the past, and now coaches youth sports for his children.

“When I coach my daughters in softball there is no doubt I was tougher on them than anybody else on the team, and in reality that’s not fair,” added a sincere Mr. Naylor. “If we’re going to say parents need to be realistic and stop coddling, then we probably also need to say we should stop being overly critical.”

Nyman understands that instructional feedback is necessary for a player’s development, but it must be given in supportive and educational ways.

“The problem is that parents use extremes when instructing their kids,” Nyman added. “They are either way too soft on them or crazy tough, both of which cause warped sense of self for the child.”