Seniors take it all In annual Powderpuff game. 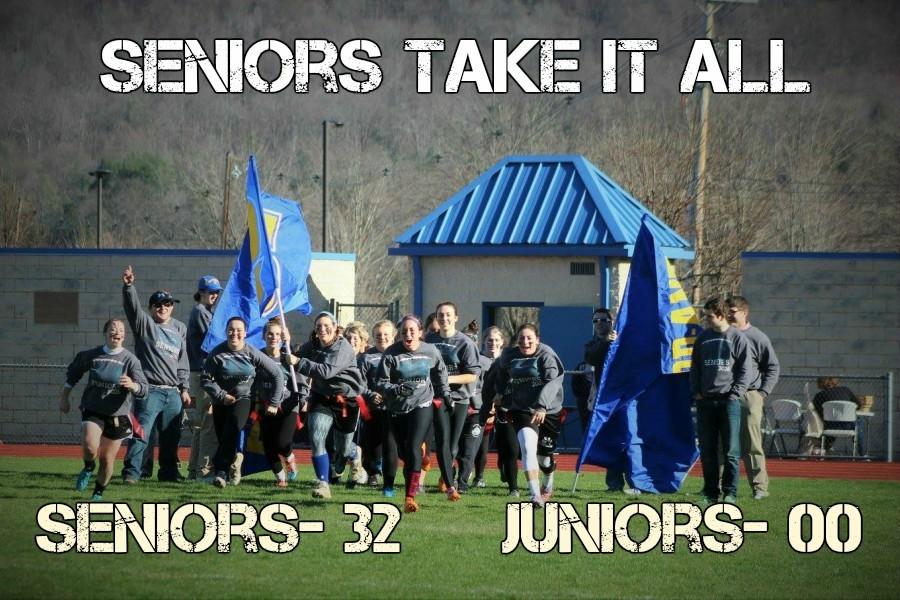 Seniors get the win.

With basically one practice the seniors ran every play flawlessly including a couple trick plays, in a 32-0 win in the annual powderpuff game, Sunday November 15.  Whether it was a fake hand-off or a pass play, the seniors pulled it off.  Their defense was great only letting the juniors get a first down three times.

The senior coaches were happy with their team’s performance.

“It was too easy,” Coach Zach Taylor said.

Fellow coaches had faith in “Old Rough and Ready” from the beginning.

According to Jake Burch, “When I said Zach Taylor was the greatest coach ever, I meant it.”

If you ask any senior they would say they’re happy to get the win but they had a lot of fun.  It was an exciting game but there was also a lot of emotion.

The juniors had trouble getting off some plays.  After starting off the game with two false starts they handed the ball off too junior Karson Swogger to gain a couple yards but were then shut down by the senior defense again.

Coach Brendan Kowalski, when asked about the loss replied, “The sun will come up tomorrow.”

Marissa Panasiti, Laycee Clark, and Caroline Showalter lead the senior running game along with Chistina Kowalski, Raegan Plowman, and Abbey Crider securing the receiving aspects.  The seniors became a well-oiled machine as soon as the game started.  Their offenses were effortless and their defense was flawless.  Nothing could have stopped the seniors. The seniors suffered two penalties that brought their touchdowns back but kept going to score anyway.

With thirty seconds left in the firs at half the juniors were looking for a stop but the seniors had another idea.  The seniors ran a hand-off to Caroline Showalter up the middle, but at the line of scrimmage, she completed the play with a lateral back to Marissa.  Abbey Crider was found calling for the ball at the back of the end zone, which resulted in a 15-yard pass for a touchdown.  The juniors got the ball with fifteen seconds left but were unable to move it down field.

Beginning the second half the seniors started off on offense and were able to get a first down and more the third play with Raegan Plowman taking it down the sideline.  That got the seniors moving.  They kept pushing down field.  The seniors weren’t able to score, so the juniors took over.  The senior’s defense went to town and Rozalyn Yancey was a silent assassin coming out of nowhere intercepting the juniors pass.  The seniors were stopped by the junior’s defense.  Christina Kowalski and Elizabeth Whaley pulled Alexis Kensinger’s flag to get the stop on defense but it wasn’t just a stop.  It resulted in a tussle between some of the girls resulting in Christina Kowalski and Saige McElwain being ejected for a play.

With three minutes left Coach Taylor called the golden play.  Marissa Panasiti lined the offense up but then the seniors acted like she didn’t know the play.  Zach yelled to Marissa to go to him and Caroline Showalter waited for the signal from Devin Burr.  When the signal was given Anna Shawley snapped the ball and Caroline handed it off to Laycee who connected to Marissa down field to score the last touchdown of the game.

Marissa Panasiti racked up some amazing stats in the second half of the game.  She passed for 15 yards, rushed 84 yards, and had 55 yards receiving.  Laycee Clark also tore it up on offense.  She had 55 yards passing and 49 rushing yards.  In all, the offense had a total of 265 yards the second half alone.