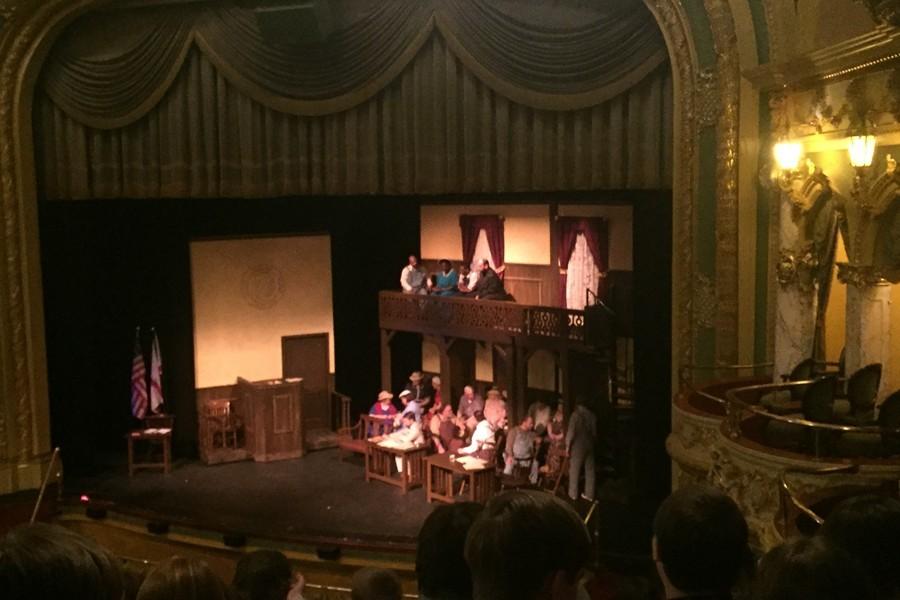 Students watch as the actors prepare for the court scene.

Last Wednesday, February 17, 2016, the honors and academic classes in eleventh grade were able to go to the Mishler Theatre to watch the famous novel To Kill a Mockingbird in play form.

The play is based off of the book written by Harper Lee, who recently passed away on February 19, 2016.

Students were able to go watch the play thanks to the Women of Blair County, who received a grant of $1,550 to sponsor an Educational Matinee for area schools. With this money they decided to invite schools from around Blair County to fill up the Mishler Theatre.

Mrs. Enedy explained how she got to be a part of this production.

“My sister was the director and she needed courtroom observers.  I’ve never been in a play before and I was very nervous about being on stage, but I wanted to help her out and I wanted to be a part of this particular production, so I said yes,” she said.

Mrs. Enedy also seemed to enjoy herself, saying, “It was wonderful.  Everybody should take advantage of an opportunity like this.  It was great to be a part of this story, To Kill a Mockingbird. You learn a lot about yourself when you challenge yourself to do something that is scary, like getting up in front of 800 high school juniors, but like I said I learned a lot about myself and it was great.”

The play was also very enjoyable to the students that attended.

Adam Bowers explained why he liked the play: “It was a great story and all of the actors were very talented.”

Not only was this experience entertaining, but high school English teacher Mrs. Carol Bartlett also feels that the students seeing the play will benefit them educationally in the future.

“The students were able to receive a jump start into the novel, To Kill a Mockingbird by Harper Lee,” Mrs.Batlett said. “Due to the time constraints of a live performance, some of the details in the text were simplified.  However, the plot was easy to follow and the characters were engaging because of the charming actors.

“As the students read Harper Lee’s novel in class, the development of important characters and themes will be explored more in depth so that they acquire a better understanding of this acclaimed, timeless classic.  At this time, too, students will be able to compare and contrast the live performance with the novel itself.”

Overall, the play was a great educational experience for the students of BAHS.