Not a boy band 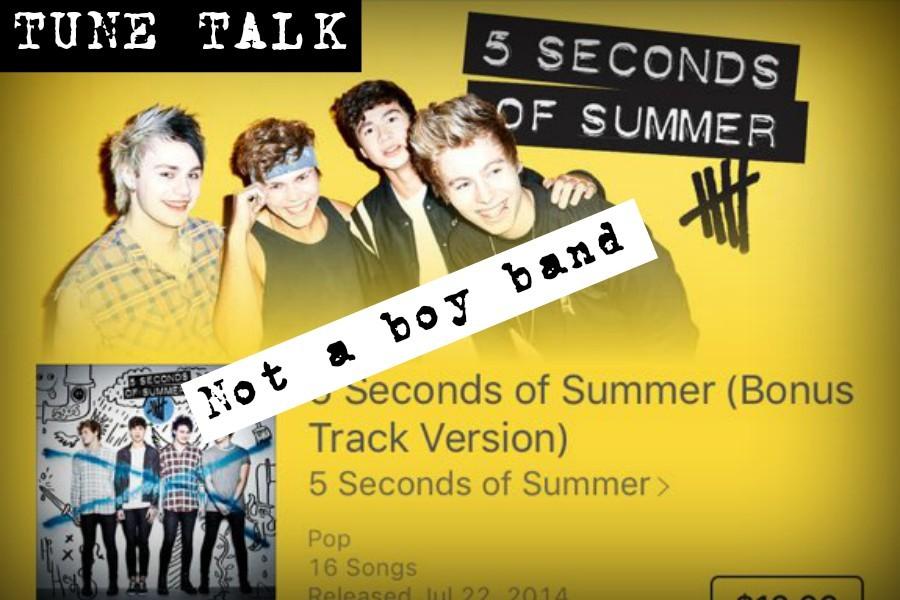 They may be five good-looking guys, but 5 Seconds of Summer is not a boy band.

One of the biggest fallacies associated with 5SOS is that they are a boy band. Let me tell you, that is not correct. Here’s why.

Their songs have mature themes and adult language.

Their debut song ‘‘She Looks So Perfect” has the lyrics She looks so perfect standing there in my American Apparel underwear and then later I’ve got your ripped skinny jeans lyin’ on the floor. That’s pretty mature if you ask me. Also, their song (only released in the UK) “English Love Affair” is definitely something you would want to play to your mother. As the title implies, it is probably their most inappropriate song with the Drinking all the way to third base, Dragged me out the bar to the backseat of her car, and Dragged me up the stairs and it wasn’t ending there. If that’s not risqué, I don’t know what is.

If you Google the well-known band One Direction, Google comes up with the results BOY BAND. On the other hand, if you Google 5 Seconds of Summer, Google says ROCK BAND.

Bigger than their popularity

Just because 5 Seconds of Summer is popular, it doesn’t mean they are a boy band. Yes, they are a band. Yes, they are all boys. But by that standard classic bands like Nirvana, Led Zeppelin, and The Rolling Stones are also boy bands. Just as Chad Smith of the Red Hot Chili Peppers said, “They can’t help that they’re attractive.”

If you were to watch any interview 5SOS had, you would very quickly realize they’re not a boyband. While boy bands are concerned with the public and how they are portrayed, 5SOS really don’t give a bother. They’ll take any chance to slide in a curse word or inappropriate joke.