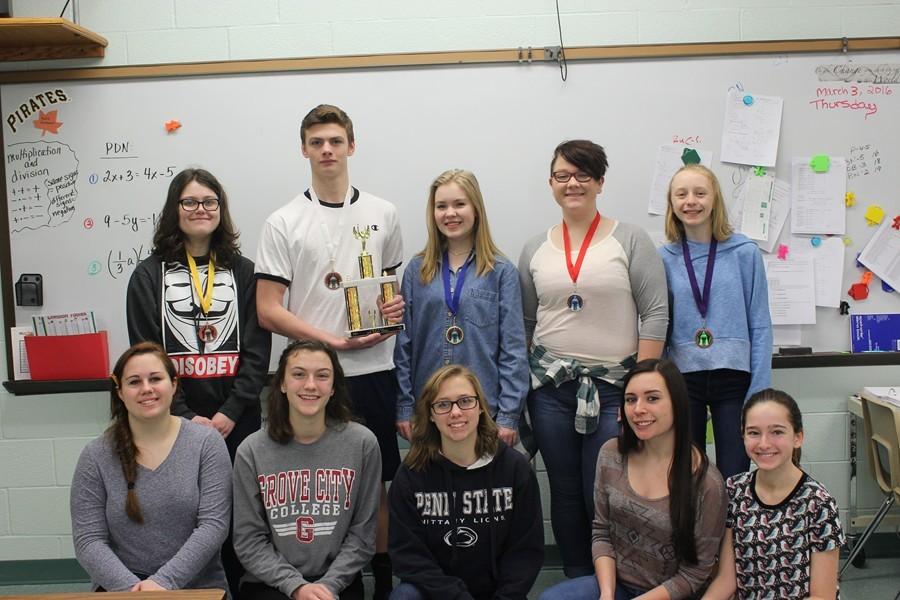 Junior Grace Misera took home the gold medal by placing first in Humorous Interpretation while several other students did well enough to qualify for nationals.

“I am the regional champion and it feels pretty great. I am very happy and surprised,” Grace said with a smile.

“It feels great because Public Forum Debate is very tough, and we had to put a lot of effort in to pull this out,” explained Kerri.

Allison McCaulley, who took home the second place prize in poetry, was thrilled about her success.

“It was exciting. I’ve been working really hard on my speech and making everything perfect,” she said. “So, I’m really excited and I’m hopeful that we can get to go to nationals and have that opportunity.”

Because of their placement, Grace, Alli, Kerri, and Hannah have qualified for nationals in Sacramento, CA in May.

These girls were not the only ones who experienced success though. Senior Luke Hollingshead placed third in Humorous Interpretation and Jenna Bartlett placed sixth in Informative Speaking as a freshman.

The team as a whole placed fourth.

With only two of the six winners being seniors, the speech team will be returning four regional placewinners back next year.  Because of this speech league coach Mrs. Sally Padula is excited to see what will happen.

“I’m proud of them, and it helps that they have at least another year to compete and get better,” Mrs. Padula said.  “Next year nationals are in Louisville and we are already planning to fundraise for it.”

The team has decided to start fundraising earlier due to the fact that nationals may be out of the question this year due to travel expenses.

“I really hope we get to experience nationals this year. We are hopeful,” explained Grace

Congratulations to all who placed at regionals!