Remaining faithful in the face of scandal 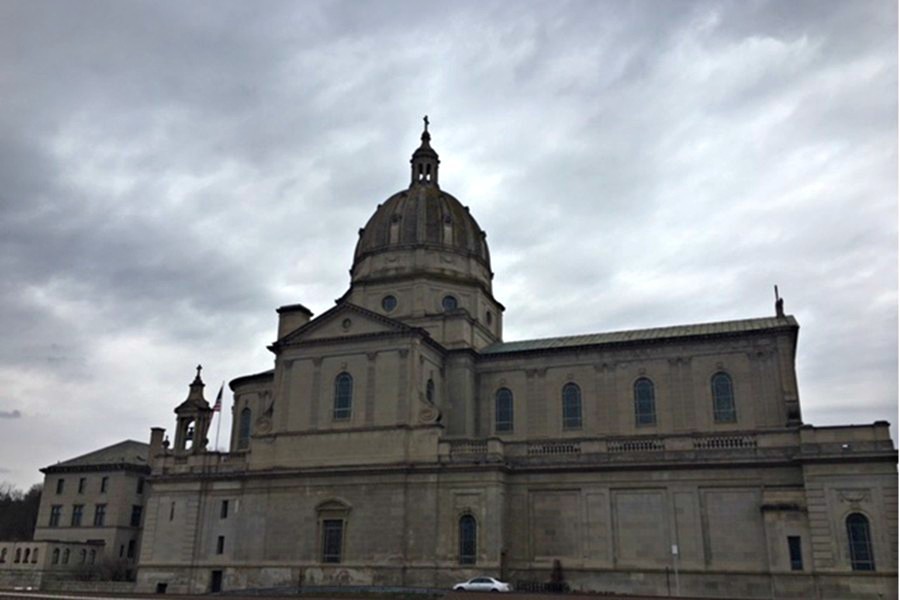 The Cathedral of the Blessed Sacrament in Altoona is one of many churches in the area named in the Grand Jury report released earlier this month by Attorney General Kathleen Kane.

Though Palm Sunday begins arguably the most somber time of the year for Catholics, it may not be the only reason for sorrow this year.

After a two -year investigation, Pennsylvania Attorney General Kathleen Kane concluded that hundreds of children were subjected to sexual abuse by 50 priests or religious leaders in the Altoona-Johnstown area.

Though the investigation is recent, the abuse is not. According to the Grand Jury report, released on March 1,this scandal dates back about 40 years, with victims being as young as six years old.

With this incident happening so close to home, it makes some people realize that Bellwood is not invincible. One of these people is senior Marissa Panasiti.

“It’s definitely scary and eye-opening. I feel like a lot of people in our area believe that nothing bad can happen to our small town, and some of the priests have ties to people living in Bellwood,” said Marissa.

One of those was Father James F. Skupien, who was the priest at Bellwood’s St. Joseph’s parish from 1983-1995, as well as Father Jospeh Stritmatter and Father Martin Cingle, who presided over Tyrone’s St. Matthew’s parish in the 1980s and 1990s.

Former Bellwood-Antis teacher Ms. Diane Hubona, a member of St. Matthew’s, says that her faith is stronger than this incident.

“If something like this were to shake my faith, then I need to remain closer to God. My heart is heavy with sadness for all involved.  But my prayers and faith are far more powerful than casting judgments on people,” she explained.

“I don’t allow the poor decisions of others to impact my beliefs and faith. I don’t think a whole religion should be seen negatively because of the horrible actions of priests,” Phoebe explained.

“It’s upsetting to see this all happen so close to home, but I’m not going to let other people ruin my faith,” junior Nathan Friedenberger said.

High school math teacher Mrs. Dawn Frank, who at one point in her career taught at Bishop Guilfoyle Catholic High School, explained why having a child in the Catholic faith can be difficult at this time.

“My youngest son goes to a Catholic elementary school, so there were a lot of questions that I had to answer for him,” she said. “It was hard to talk to him. He is a 12-year old, so it was hard to sit down and explain to him in a way that he would understand, and without scaring him.”

Mr. Nick Lovrich a Physical Education and Health teacher at Bellwood-Antis High School who went to St. Matthew’s Elementary School, has also been impacted by this incident.

“It’s very unfortunate for the victims of the child abuse, but the priest at my church used to say that 10% of the whole population has some type of mental issue with them, so 10% of priests are going to have the same thing,” Mr. Lovrich said. “It’s unfortunate that something like this happened, and I think that the cover up was just as bad.”

The Grand Jury report explained that Bishops James Hogan and Joseph Ademac had knowledge of the crimes and the ability to act, but instead “chose to shield the institution and themselves from ‘scandal'” by moving the offending priests from parish to parish.

“The Catholic Church finally has to muster the courage to accept full responsibility for its negligence in merely shuffling priests and offenders from parish to parish to keep secrets hidden,” Mrs. Hubona said.  “Priests and nuns are human beings and are capable of the same predilections as lay people.  These individuals are sick and need to be helped rather than hidden.  They also need to face the consequences of their actions.  I personally know quite a few of these priests involved; they, as well as the countless victims, need our prayers.”

Overall, the students and staff at Bellwood-Antis are staying true to their faith. With that being said, almost all want a resolution to this incident, and want to know what will be done to prevent more of these situations from happening.

“It didn’t shake my faith, it didn’t make me not want to be a Catholic, and I am not embarrassed of being Catholic. It did make me wonder what is going to be done,” said Mrs. Frank.  “Hopefully something is going to get resolved.  I guess my biggest question is how they are going to keep this from happening again.”