Recent budget is only a temporary solution 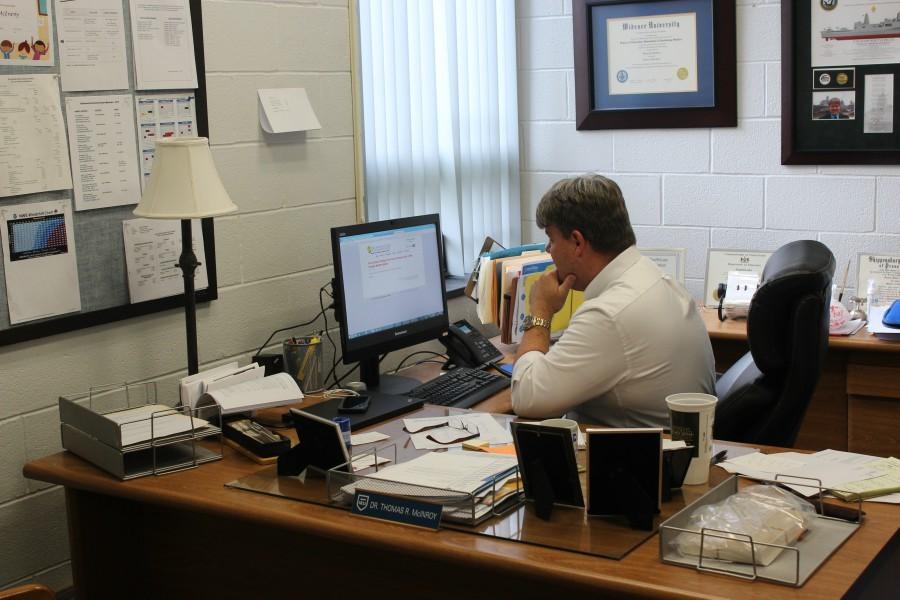 B-A Superintendent Dr. Thomas McInroy keeps up with the financial situation in his office. McInroy said the recent budget resolution is just the beginning for Pennsylvania's public schools.

Last Wednesday education advocates and school officials all across Pennsylvania felt relief as Governor Tom Wolf announced that he would let a $30 billion budget bill go through without his signature on it.

The bill will allow schools to remain open for the remainder of the school year. One person that is feeling relieved about this is Bellwood-Antis Superintendent Dr. Thomas McInroy, who said the budget helped avert a dicey financial situation at B-A.

“It is a relief. Even though it’s status quo, it is still better than nothing,” said Dr. Mcinroy. “We were short about $4 million.

“June 30 was the call date on the loans that we have.  In other words, we had to pay whatever loans we had taken out back by June 30 and we didn’t have the revenue to pay it back. We were kind of in a quandary as to what to do.”

While school officials are feeling temporary relief, it does not seem like that they are celebrating. In fact, most are still not satisfied with the current form of the budget. One of the biggest concerns is that the state is not providing money that was promised for prior construction, leaving the school in debt for construction costs.

“So for the past three or four days 34 superintendents in our IU have been trying to figure out what to do with PlanCon. PlanCon is a state form that we have to fill out when we do construction projects,” Dr, McInroy said.  “Well, in 2008 they completed the elementary school. Now when you do PlanCon, you go through certain steps that the state makes you do for the building.  In return, they pay for a big part of the construction project.  What has happened is the state has defaulted on their payment to school districts.”

Because of the state not going through with the promised state aid, schools in the area are in debt, including Bellwood-Antis.

“Everett School District is about a million dollars short. We have other school districts that are about $750,000 short just for one payment.  For our school it is a little over $200,000 from last year.  This next year we are about $160,000 short,” Dr. McInory explained.

With that in mind, Dr. McInory wants people to realize that this budget was just enough to keep the doors open, and that the budget passed was not a full budget.

“We have a state budget finally in place for the 15-16 school year but we are not yet done,” Kathy Swope, the PA school board association president, told PennLive,com. “School districts must be made whole again after almost a full year of financial uncertainty and in many cases, turmoil. It is unacceptable for the state to leave districts in such dire straits that they even consider closing their doors.”

Dr. McInory believes now is the time to resolve this budget issue, and wants the community to voice their opinion.

To sum it all up, the recent budget that was passed was only a temporary fix. In order to get a permanent fix more people across the state need to voice their concerns over the budget to their local and state representatives. School officials everywhere are in hopes that a fix to all of the schools financial problems will come soon.