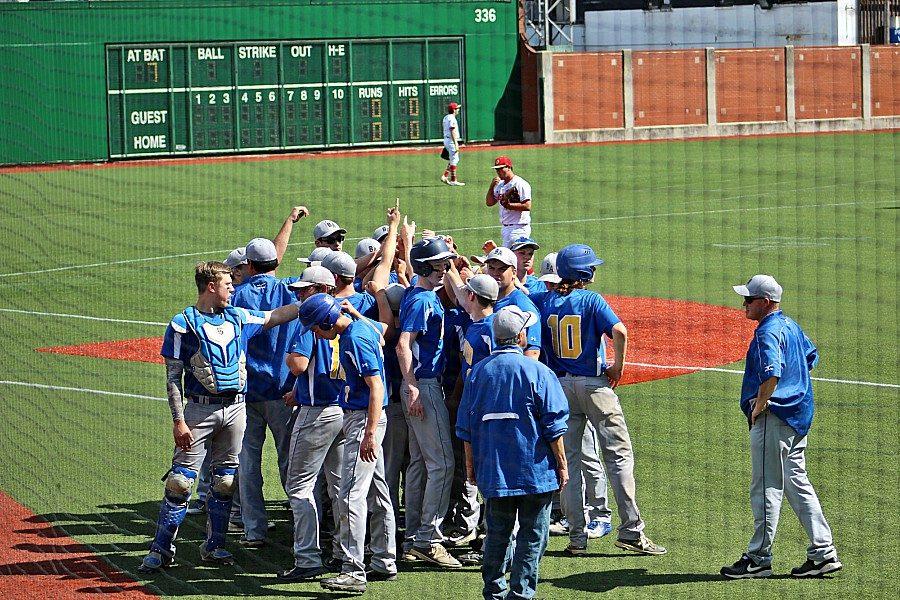 The Blue Devils gather before the game.

Yesterday, the Bellwood-Antis boys baseball team lost 7-5 to No. 3 seeded Bishop McCort at Point Stadium in the first round of the District 6-AA playoffs.

Cory Parson took the loss for B-A as he started the game and let up five runs against the Crushers.

Bellwood had a seventh inning rally but unfortunately it was not enough.

Down four going into the seventh B-A was able to push across two runs, but they finished the game leaving the bases loaded, which was a common theme throughout the afternoon.

The Blue Devils left 11 men stranded on base and had four errors which all helped account for the loss.  B-A pitchers also walked four and hit three.

“We battled until the end,” said head coach Steve Conlon. “We were able to keep it close, but we just couldn’t get the big hit when needed.”

Sawyer Kline, Nevin Wood, and Jack Showalter all had multiple hits for the Blue Devils.

However, the Blue Devils had no answer for Blake Wade, who was a thorn in their side all game. He blasted a triple and a home run, drove in three runs, and scored twice.

B-A is a young team with only a two seniors and will look to be back in the playoffs next year.