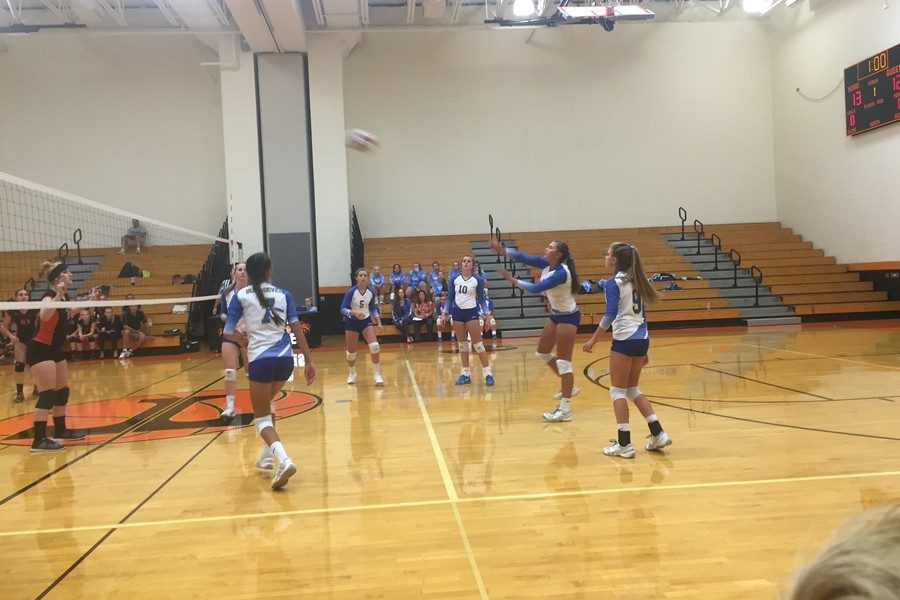 It wasn’t easy, as BA fell in the first set 25-23, and was pushed to a fifth and deciding set.

“It wasn’t hard once we all got into it,” said Lindsey Southworth. “Tyrone played a good game.”

The Lady Devils pulled away winning the fifth set 15-6, coming back after the loss in the fourth set.

“Our serving killed us first game, but once we got that under control we were able to pull ahead,” said Lindsey.

Junior Kamrynn Mercer felt it came down to nerves.

“Going to Tyrone, with their student section, we were nervous,” she said. “But once we got in the flow of the game we were OK.”

Bellwood girls stole the second set 25-23. Bellwood scored another win in the third set, winning 25-11.  Tyrone forces a fifth set by dominating Bellwood 25-16.
Girls Varsity Soccer team takes down Philipsburg
The Tyrone/Bellwood-Antis co-op team took down Philipsburg on the road. In the end, it was 5-0 after 80 minutes of hard fought action.

In the second half, B-A sophomore Riley D’Angelo found the back of the net two times for the Lady Eagles. Elina Lure added the 5th goal for the team.

Riley’s first goal came in the 56th minute of the game and then her second came at the 25th minute. Elina’s goal found the back of the net at the 55th minute.

It was the season opener for the Eagles.
Boys Soccer loss Against Hollidaysburg
Yesterday at Hollidaysburg’s Golden Tiger Stadium, the Tyrone/Bellwood-Antis boys varsity soccer team started three freshman on the field in a 7-3 loss to Hollidaysburg.

It was close, 4-3 into the half, but then it fell downhill from there.

“We battled back and made it close, but we couldn’t get anything going after halftime,” said junior Blake Johnston.

Freshman Alex Roberts started in goal, letting all seven go through. Freshman Corey Johnston scored twice. He scored once at 12:14 and another time at the 35th minute. Andrew Pearson scored unassisted at 25:00.

Robert VanKirk ran the team into battle with a time of 19:46. Stephanie Mills won with a time of 25:57, and Jenna Bartlett, in second place was not far behind her.

“Most of the time the heat affects us, but it really all comes down to your mental game,” said Senior Stephanie Mills. “I was happy with my run. It is still early but it was my personal record this season.”