High school initiative against bullying kicks off the new year 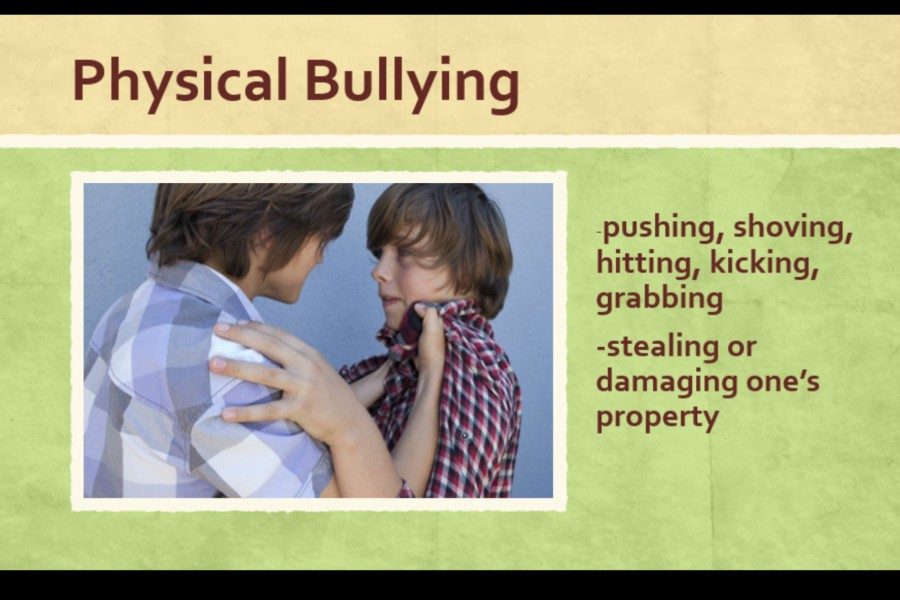 Part of the anti-bullying Power Point shown to students on the first day was a section about the four different types of bullying.

The first day of school, we all know the drill. Possibly the only day you can say with confidence you will dress to the nine’s and get to school on time.

Day One Back to School is usually a day-long lecture on prerequisite do’s and don’ts of each class on your schedule, starting with a brief overview of BA’s notoriously long student handbook.

In past years, students at Bellwood-Antis have gone over the bullying policy and moved on to the next section, but this year the high school took a different approach.

Rather than going over bullying briefly, the high school took an entire forty-five minute period to focus solely on the epidemic of bullying and the new initiative Bellwood-Antis is taking as a district to put it to an end.

This year, the administration had teachers put time aside to talk to students about bullying, using a Power Point presentation and activities organized by Assistant Principal Cathy Adams. The goal was to address topics around bullying such as signs it’s happening, the four primary types of bullying, and what to do if it’s happening to you.

Teachers delivered the lesson during homeroom on August 29.

The initiative is in part a response to the way the 2015-16 school year ended.

Mrs. Adams said, “There were concerns last year at the very, very end of the year.

“There were student and parent concerns, so Mr. Schreier and I wanted to look further into it.”

She went on to say that she felt there are so many benefits in just bringing bullying up and talking about it, and that a difference would come about from discussing it with students.

Freshman Bella Kies said she felt the presentations were effective, and it helped her consider the issue of bullying.

“It was organized very well,” she said. “Bullying isn’t something I normally think about, but you know that it goes on.”

2016 Valedictorian Kerri Little, who skipped out on last year’s graduation and became an overnight social media phenomenon, mentioned in a Facebook post in June that bullying was prevalent in her class. The post quickly went viral.

Little said via radio interview that she knew doing what she ended up doing she could bring a lot of attention to some of the problems at Bellwood-Antis.

Teachers at B-A felt the program was worthwhile.

“I felt it was a good thing to do, and I’m glad my students get to learn about bullying and how to cope with being bullied,” said Mr. Burch, who delivered the lesson to his tenth grade homerom.

Bellwood-Antis is setting its hopes high to have a bully-free school year.