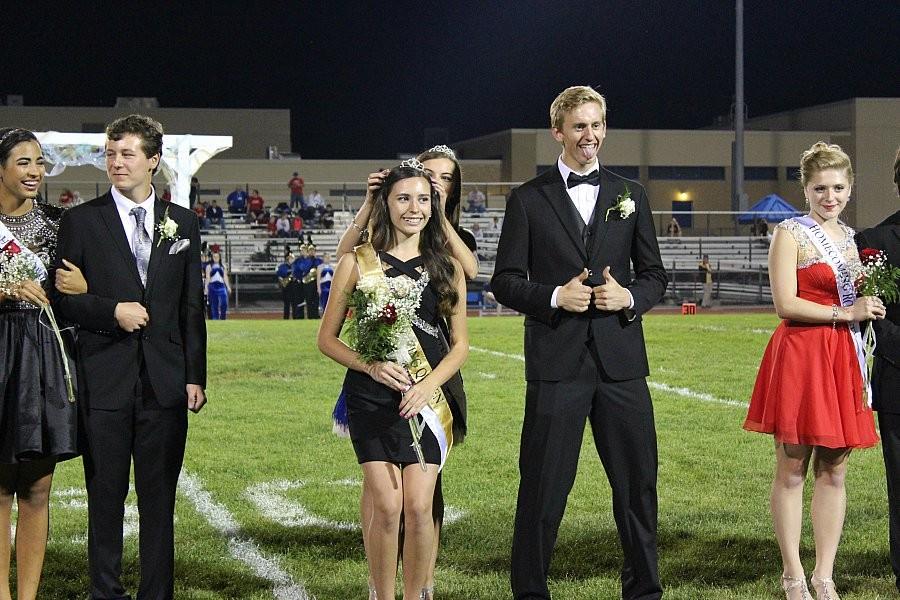 It’s hard to say who was more thrilled with the announcement of the new Homecoming Queen: the winner, Maria McFarland, or her escort, Nathan Davis.

Last Friday evening was the crowning of the Class of 2016’s Homecoming Queen on the fifty-yard line of Memorial Stadium.

Maria McFarland was awarded Homecoming Queen and was given red and white roses. Last year’s queen, Paige Padula, came back to crown Maria and give her a golden sash.

“Winning Homecoming Queen is such an honor. I enjoyed every moment with the other girls on the court. Everyone was so nice,”  Maria stated.

The night kicked off with the annual Homecoming spaghetti dinner. The girls and their escorts dined in the middle school until pictures were taken by Manning Photography.

The girls were transported from pictures to the Hillside Community Church for the parade. Each couple rode in the parade in beautiful cars.

The couples were escorted into the stadium during pregame and sat in exquisitely decorated reserved seats in the bleachers.

I will never forget the memories I made over the past week.”

This year’s colors for Homecoming were tidewater blue, champagne, and silver. There were lights hung up on the bleachers and the trellis as well.

Each couple walked onto the field and had a dedication read in their honor. The dedications stated their family members, clubs, and community service each girl is involved in.

Then the highly anticipated moment came. Rozalyn Yancey was announced first runner up and was handed a stunning yellow rose, leaving Maria as the new queen.

Win or lose, it was a special time for the nominees.

Homecoming nominee, Kala Wooten said, “Homecoming was such a fun time. I will never forget the memories I made over the past week.”

The evening wrapped up with pictures of the court with their family and friends and a win from Bellwood over West Branch of a score of 35-14.