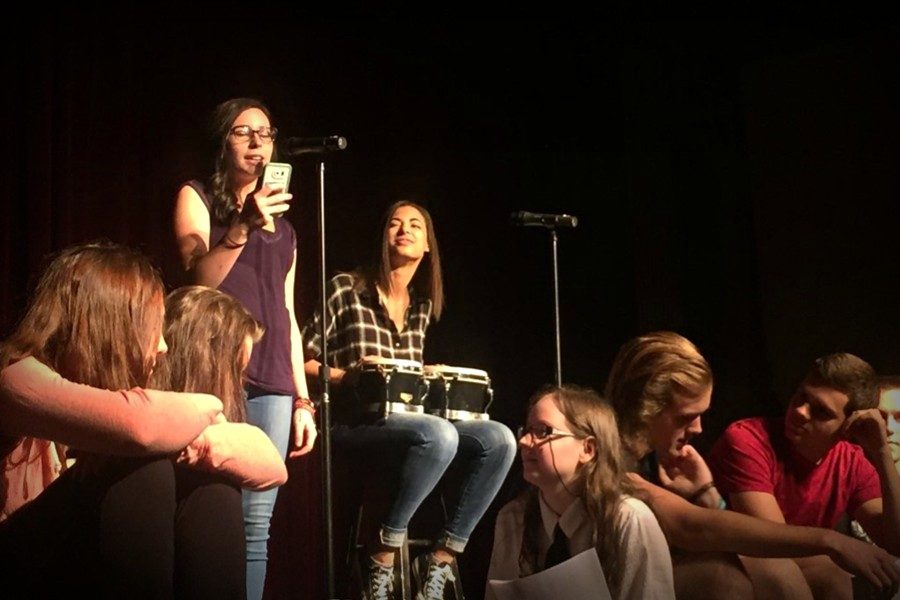 Maria McFarland and Kala Wooten kicked off the Poetry Slam with a poem called “Hashtag.”

Junior Alli McCaulley became a repeat winner at the annual Bellwood-Antis Poetry Slam Friday, winning the individual slam category with her poem about dealing with the negativity of others titled “An Open Letter to the People Who Laugh.”

McCaulley was one of 26 acts to perform at the annual event, which invites the student body to the high school auditorium for two periods of spoken word poetry. She won the Slam her freshman year, as well, with her poem “10 Reason I Hate My Ex-Boyfriend.”

The event began 13 years ago under the direction of former B-A teacher Diane Hubona, and for the past four years it has been organized by high school English teacher Mr. Kerry Naylor.

“The event gets bigger and better every year, with students continually stepping up their game with creative and meaningful poems,” Mr. Naylor said. “It has become a solid Bellwood-Antis tradition that the student body looks forward to, and it’s an excellent platform for our performers and writers. Today, we had the perfect mesh of talented performers and an attentive and respectful audience.”

Poems of all types are eligible for the Poetry Slam, and winners are selected in the categories of individual and duo slam poems.

In the duo category, seniors Luke Hollingshead and Revel Southwell won for their witty take on current politics with their poem “The 2016 Presidential Election.”

Along the way, many others stood out. Freshman Alivia Jacobs and Jenna Bartlett had an amazing performance of their duo poem “Freshman Year: Expectation Versus Reality,” and sophomores Sidney Patterson and Christina Hollen made a statement with their poem “Growing Up Girl.”

Many poems demonstrated the student body’s penchant for humorous poems, perhaps none more so than junior Gabby Zuiker’s poem “Fire Alarm,” which brilliantly demonstrated the power of the poetic device of onomatopoeia.

On a more serious note, senior Zane Wenner presented a poem about PTSD, while freshman Chris Kline presented “Reasons You Should Not Commit Suicide.”

Mikayla Carles and Jason Shade were this year’s emcees, proving worthy replacements for 2015 graduate Dallas Huff, who emceed the event for three years.

At the end of the show, just prior to the announcement of winners, the BluePrint recognized retiring high school English teacher Susan Zong with its annual Teacher of the Year award. 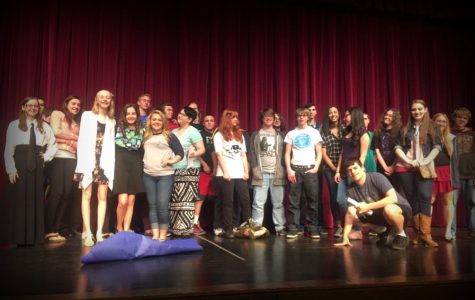 An Open Letter to the People Who Laugh

Alli McCaulley used some late-night heroics to draft this individual winner: "An Open Letter to the People Who Laugh." It was the second Poetry Slam victory for the girl who took top honors her freshman year with the poem "10 Reasons I Hate My Ex-boyfriend."

So what's it like to be a freshman? Now that it's May, things might not have gone the way you anticipated if you are a ninth grader. Freshmen Alivia Jacobs and Jenna Bartlett give the ins and outs of the life of a ninth grader in their poem "Freshman Year: Expectation Versus Reality."

What is the most annoying sound in any high school? It's not fingernails on a chalk board or the sound of a teacher announcing weekend homework. It's a fire alarm. Still not a believer? Watch this poem by junior Gabby Zuiker called "Fire Alarm," and you find yourself agreeing.

This isn't a man-hating poem. However, it is a poem that reflects some of the frustration women feel growing up in a society with unfair expectations. Sophomores Christina Hollen and Sidney Patterson navigate the duo poem form with their poem "Growing Up Girl."

With social media and all of its trappings a more prevalent influence in society every day, it is a prime subject for poetry. Senior Kala Wooten and Maria McFarland took on the topic at the Poetry Slam with a poem called "#Hashtag," which expresses apprehension at the ways social media can affect its users.

There’s no shortcut to hard work

So you want a hard body? You want to be strong? You want all of the good things in life? Junior Zach Salome has some advice for you: There's no shortcut to hard work.

These guys have been friends since elementary school, which is why it's funny to see Jake Burch and Jake McCaulley ribbing their buddy Nathan Davis in the Poetry slam in their poem "Nathan."